“Astroturfing” is when a business poses as normal people on social media to spread their message. What I didn’t expect was that a company would do this to squash a fan theory about “Who are Rey’s parents?”. I think Disney is astroturfing to prevent Star Wars Episode 8 spoilers, and here’s why. 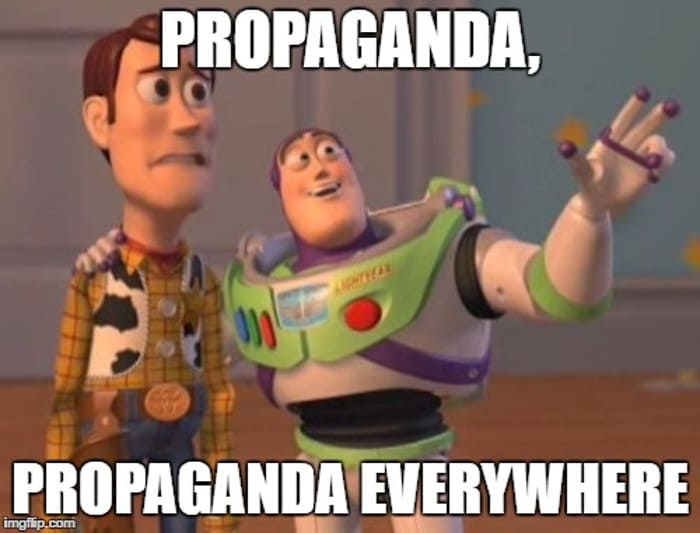 If you don’t think Episode 7 is a copy of Episode 4, you’re not nearly as smart as you think:

A New Hope vs The Force Awakens pic.twitter.com/0z7B2MO0ZH

Being around a Wookie, fixing the Hyperdrive in the exact same way as Han Solo, completing Han’s sentences, and being Force Attuned really narrow down the options regarding her parentage. There’s more in the link above, but that’s the gist of it.
Other theories are based in pure speculation:
Luke’s daughter theory

The last one completely forgets that Leia is a Skywalker and that her children are Skywalkers as well. The lightsaber calling to Rey is a copy of the cave scene in Empire Strikes Back, where items/areas with latent Force can cause mini freak-outs in Force Attuned people. So the only “evidence” is Luke looking at Rey. This also doesn’t explain how she knows Wookie or why Rey and Han finish each other’s sentences.
Kenobi’s daughter theory: No evidence, just some people hoping.
Other person we haven’t met yet: I’m sure that halfway through a trilogy we are going to meet some random dude who shows up and pays backdated child support for all those years on Jakku. Basic storytelling rules this theory out.
People have speculated a bunch of nonsense on who Rey’s parents might be. Read “Gizmodo’s 24 most insane theory’s about who Rey’s parents are“.
The main argument against Han and Leia being Rey’s parents is that they “would have to be horrible parents to leave her on the desert world of Jakku”. Anyone who makes this argument hasn’t seen the original Star Wars, in which Luke is dumped on the desert world of Tatooine in similar fashion… or have they seen it and are spreading lies to cover up spoilers?
Why do I think Disney is astroturfing?
The internet fulfills the prophecy of “1,000 monkeys at typewriters for eternity will eventually produce The Bible”. We are those monkeys, shitting out content every day. Every ridiculous theory out there gets play time…
…except the Han and Leia theory.
Almost all of the articles, posts, and Tweets discount this theory. The cover-up is so overt, it’s covert.
I looked at the top 100 Google search results for “Who are Rey’s Parents?”. Some of the articles stated their theory concretely, while others leaned one particular direction. If it was unclear or they didn’t choose a side, I didn’t add it to any total.
Top 100 search results for “Who are Rey’s Parents?”:

You’re probably wondering why these numbers don’t add up to 100. It’s because of two reasons. First, many articles didn’t pick a theory. Second, director J.J. Abrams misspoke at a film festival and said Rey’s parents weren’t in Episode 7. While he’d quickly retract this statement to mean “they weren’t discovered in Episode 7″, a flood of articles were printed and clogged up the results.
Jyn Erso (Rogue One) was named as Rey’s mother before the movie even came out!
Ezra Bridger is a character of Star Wars: Rebels video games, and was named as a potential father on complete speculation.
Emperor Palpatine was listed as Rey’s father for reasons too stupid to mention. Seriously don’t look into it, it will make you dumber.
Flowcharts like this exist, making you think all the options are equally likely. Chewbacca as the father is a possible choice on this flowchart.
So the only couple in Episode 7 capable of having a Force Sensitive child ranks alongside ridiculous nonsense such as being cloned from Luke’s dismembered hand. OK.
Where do you hide a leaf? On the forest floor with a million other leaves.
The biggest perpetrators of the Luke-as-father theory are big media sites. Of the three search results that had Han Solo as the father, only one was a mainstream site (vox.com). They give roughly the same reasoning as I do for Solo parentage. And this article came right after the movie came out. My guess is that too many people were figuring it out too quickly, and Disney felt they had to protect their $5 billion investment in the Star Wars franchise. Articles quickly appeared on big media sites to squash any Han/Leia parentage theories.
One of the most notorious sites for spewing bullshit, HuffingtonPost.com, printed the following:

The only time the Han/Leia parentage is mentioned is #3 on the list of the first article, #1 of which is that Luke and Leia committed incest to make Rey. I don’t think Disney would sign off on their main character of a $5 billion franchise being the product of incest.
The media was drowning out Han/Leia parenting theories in a sea of garbage.
Methinks thou doth protest too much
Every “theory about Rey’s parents” post on Reddit gained traction… except the Han/Leia theory.
The most popular post was a moderately popular one where almost every comment on the post was disagreeing with the Han/Leia theory.
Why would Disney pay people to cover up a fan theory? Because if people already knew “the twist”, it would reduce interest in the following movies!
Here’s a Reddit post that surmised fan theories ruined the TV show Lost.
One comment in particular sums it up:

Writers: “We have a phenomenal idea for the ending of the show! It will make everyone’s heads explode and will blow their tits off!! This ending is going to be pure genius!”
Internet: “Are they [spoilers]?”
Writers: fuck

If the internet spoils the surprise twist of in season 1 of a six season show, that’s a disaster. The post details that the creators then had to steer the show in a different direction to try and not be as obvious. The result was that nearly everyone hated how Lost ended.
Episode 8 comes out on 12/15/17, when we find out if I’m right or wrong.
I actually hope I’m wrong and that Episode 8 isn’t a rehash of The Empire Strikes Back. I hope that Disney put more thought into the movie rather than their astroturfing. But, so far, I have no reason to think that will be the case.