I travel to learn about myself and the rest of the world.  Sometimes I learn things that aren’t pictured on most travel brochures.  Like prostitution.  I’m going to admit straight up that I don’t have first hand experience with it, but we see it all around us when we travel.  Usually at dinner.  The guys will bring the working girls to eat before they presumably go somewhere more private.  And I just have one question: why is dining with hookers so common? 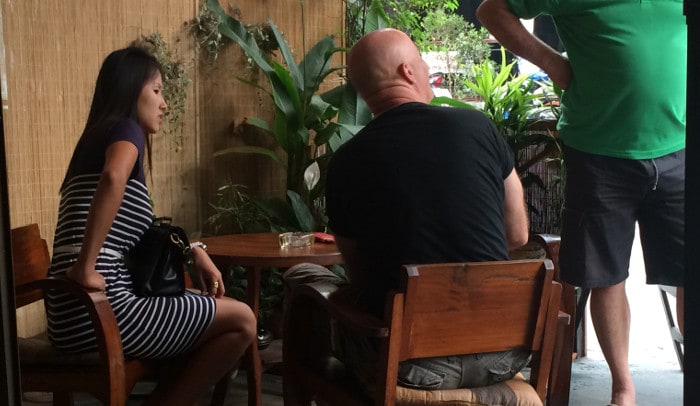 How to spot it
It’s generally pretty easy as it almost always starts with white male and native female.  That can’t be the only factor because obviously people of different ethnicity get together all the time.  It becomes more likely when the two are pretty far apart in age and/or attractiveness.  The clincher is when there’s a language barrier.  A 50 year old eating with a 20 year old and neither are talking?  That’s not some old family friend coming to visit… (Bonus points if only he is eating)
The First Time We Saw It…
…was in Jamaica.  This was our first international trip together, and it wasn’t going smoothly on our first night there.  Everyone and their brother kept offering us drugs, our room was a shit-hole crawling with bugs and lizards, it was hot as hell even at 10 pm, and we were hungry.  Our cabbie took us to a run down place the locals frequented that had the most mediocre food I’ve ever eaten.  And then, sitting at the next table was an aging hippie with two girls that couldn’t have been older than 20.  Neither of the girls were eating, no one was talking, and he was not in any hurry.  All I could think was: Jesus this country is hell on earth… we have how many days left here?
It wouldn’t be the last time we saw Dining with Hookers.  We are in Thailand at the moment, and here they have made working girl dinners into an art form.  We are staying in the Sukhumvit area of Bangkok which is a trendy area for tourists to be.  We are a few BTS stations down from Nana plaza which is widely considered to be the hub of prostitution in the city.  Next to us is a collection of tents that is it’s own makeshift mall.  In typical Thai fashion, people set up their shops/bars/restaurants wherever there’s an open piece of cement.  Inside this tent-mall, the clientele is predominantly tourist.  The tables are usually some combination of white guy(s) and Thai girl(s).  There are Thai women dressed in what we’d call “clubbing gear” back home, just whiling away the evening looking at their cell phone or nothing in particular.  Eventually a guy will show up, and they’ll sit to have the ritualistic silent meal.
It got better!
A couple of days later in Jamaica we walked by the restaurant we’d visited on the first evening where we’d had such a bad experience.  One of the working girls we saw before was talking and laughing with a group of friends.  The drug dealers who are on the beach in Negril were playing a pick-up game of soccer.  It was very humanizing to see them this way.  If someone is in abject poverty or a real hopeless situation, it can seem like they are just doomed and you can get an overwhelming feeling of helplessness.  But seeing people enjoy the simple things in live was very uplifting.  I even mentally forgave one of the drug dealers for threatening my life the evening before.


Refreshing Honesty
Livingthai.org (not safe for work!) is a fantastic website around the sex trade in Thailand, written by a purveyor.  In his own words, “a pimp”.  Warning: if you have strong moral objections against prostitution in any form, just don’t go there.  If you want to learn about a sub-culture you might have not known existed, it’s a fascinating read.  In many ways it’s a lot more honest than what goes on back in the US.  In between learning about the sex trade, you’ll see people struggling with racism, wanting to create a meaningful life, and building a community.  It’s a fun experience when after reading an article about the best brothels in Chiang Mai there’s an article on how to succeed in building your business.  Surreal.
Getting rid of the demons
I think it’s pretty easy to sympathize with the people who have sex for money.  Maybe they have no other choice or other options are even worse than selling their bodies for sex.  I don’t really know the situation.
Seeing the guys take them out for dinner reveals a less common thought: maybe it’s not even about the sex at all.  Maybe it’s just sheer loneliness.  I mean, these guys fly halfway around the world just to pay a girl to have dinner with them.  When the best option available is to travel thousands of miles just to pay someone to talk to you… It’s difficult to see the guys as sex tourists and easier to see them as social pariahs.
Watching the working girls operate is interesting: they have a method
The working girls typically operate from a few areas in Thailand, namely go-go bars and massage parlors.
Bar girls usually stand in front of the bar to drag in western guys and get them to buy the girls overpriced drinks.  Seriously, the drinks are like double anywhere else nearby.  As long as she has a drink in hand, she will talk to the guy.  It’s sometimes funny to overhear the guys not quite understand what is going on (“Dude, why won’t she talk to me if I don’t buy her a drink?”), like these guys have the most amazing lives that the Thai girls who barely speak English just have to hear about.  After a few drinks, the bar girl is free to negotiate with the guy regarding other services.
The massage parlors are everywhere in Thailand and they are actually more honest than the go-go bars.  If you want a massage for the listed price, that’s what you get.  If you want something else, that’s what you get.  Like the bars, the girls sit out front and offer massages and other services to passersby.  When I’m walking with Alicia, there are only offers of a massage.  When she isn’t with me, that’s when I hear offers for other “hands-on” activities.  On Phi Phi island, where there is a large backpacker presence, the working girls are even more forward.  They walk right up to the guys and grab their junk.  Even the most clueless guy can figure it out.  If he refuses, they even challenge his manhood: “Are you chicken?”.  You can see the wheels turning as he mulls it over while she has him firmly by the nuggets, thinking “1500 baht is like… $45… that’s less than taking a girl to the movies back home”.
I don’t know what to think anymore
Before the trip I would probably have come down on the sex trade much harder than I would now.  On the one hand, I certainly agree with one of our tour guides: “It’s bad for the Thai people.  The culture”.  On the other hand, seeing the clientele doing it out of severe social isolation makes it difficult to condemn them as well.
So now I just roll with it, politely letting the working girls know that I’m not interested so they can go grab the junk of the next guy.  And maybe, even have dinner with him.