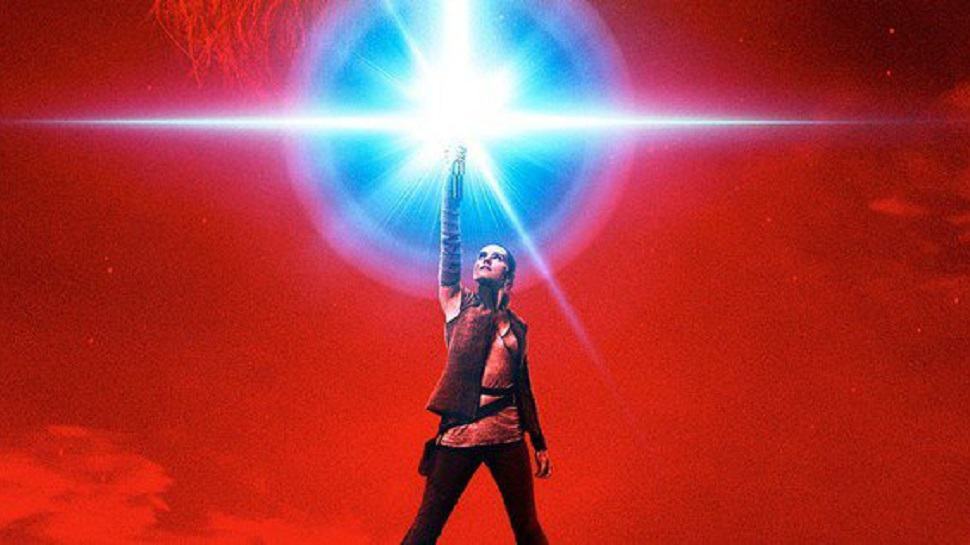 Early reviews of The Last Jedi claimed that the movie might have *too much* new material and not be faithful enough to the original. I went into the theatre excited and hopeful that they wouldn’t simply repeat Empire Strikes Back, because I’d seen that movie hundreds of times already. Either I would get to enjoy a new movie, or I would get to say “I told you so” for my correct prediction years earlier that these movies are simple rehashes of the originals.
And… I told you so.
Everything I said 2 years ago is still correct. These are just lazy rewrites of the originals.
Why are people saying it’s a new movie? Because when director Rian Johnson went to get Empire Strikes Back from the shelf so he could blatantly rip it off and make $5 billion just like The Force Awakens did, he made a huge mistake: he grabbed Return of the Jedi! So he spent all that time copying Return of the Jedi for episode 8 when it was supposed to be the end of the trilogy instead of the middle. He finally realized that he copied the wrong movie as the opening scene of Empire Strikes Back appears at the tail end of The Last Jedi. OOPS! Collecting billions of dollars for no effort is hard work!
Rian Johnson wrote as well as directed The Last Jedi. One night while taking notes on Return of the Jedi, he got a brilliant idea: why not just rip out the pages of the original script and paste them into the new script for The Last Jedi? That would save precious hours retyping dialog and scenes! So he ripped all the pages out. Then, disaster struck. Rian dumped all the pages on the floor in a heap. Putting them back in order would take at *least* 5 minutes. Fuck that! He slapped the ripped pages in a folder in random order and swam in the millions of dollars Disney gave him.

Here’s a list of scenes in order as they appeared in The Last Jedi. Parenthesis show the original movie it was copied from and if it occurs in the beginning, middle, or end of the movie.

I mean, it wasn’t totally the same. The AT-AT’s from Empire Strikes Back now had knee-pads and the white stuff was salt instead of snow. So different!
The things I thought were going to happen in this movie were merely pushed to Episode 9.
Visually Stunning
The highlight of the movie is easily the extraordinary special effects which are a staple of the series. 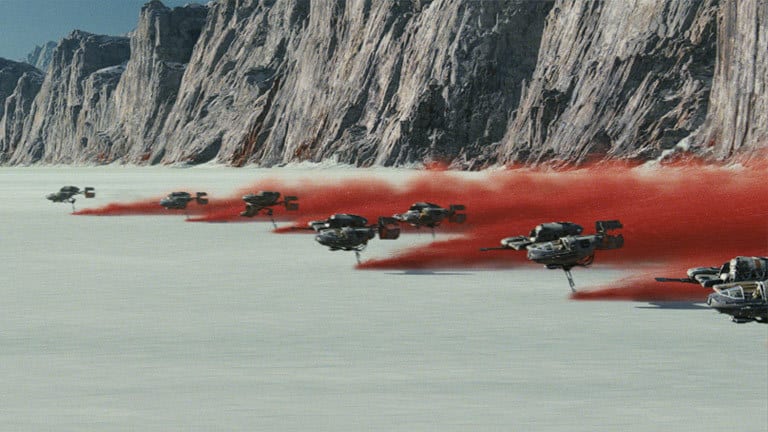 The choreography and pacing of the fight scenes is excellent as well. Maybe the story behind the fights doesn’t make much sense, but damn they look good!
Rey’s Parents
Kylo Ren tells Rey that her parents were nobodies. They were dead in the sand of Jakku and sold Rey for drinking money. Case closed on three years of speculation, right?
Nope. Lying about dead parents was in the original. Obi-Wan told Luke that his father, Anakin, was killed by Darth Vader. In Return of the Jedi, Luke and Obi-Wans ghost have a little talk about “points of view” and that Anakin ceased being Luke’s father when he became Vader. Try to be surprised in Episode 9 when this happens.
Rey is still the daughter of Han and Leia, brother to Kylo Ren. Read the rationale here.
You forgot about Finn!
No, but I wish I had. Rian had a problem: the character of Luke Skywalker was split into two characters, Rey and Finn. Rey can do anything because she’s all-powerful in every way. As this bloopers article points out, how can she swim so effortlessly as she grew up on a desert planet?
https://screenrant.com/star-wars-last-jedi-mistakes-inconsistencies-plot-holes/
This type of character is called a Mary Sue. Hermonie in the Harry Potter movies is another example of a Mary Sue: perfect in every way.
Finn gets all the trash characteristics: he’s a hopeless coward who can only be guilted into doing something admirable. Seeing as he’s basically the co-lead, he gets a story arc in The Last Jedi that is pointless and boring. And for good measure, they threw in a romantic interest while catering to the huge Chinese audience.
Did you know that animal cruelty is bad? A Public Service Announcement from Rian Johnson
In a universe with hyperspace technology, the only way to get a “racehorse” to run fast is by repeated abuse by laser whips. They don’t even have fake-rabbit-on-a-rail technology like the average dogtrack.
The alien horses are cared for by slave children who clean up after them because rich people are evil. Because I’m fairly certain that a society that can make droids like C-3PO and R2-D2 have invented the Roomba.
Rose said “it was all worth it” because the alien horses got to run around for a bit. Finn and Rose just left those little slave kids.
Did you know the only way to get rich is by selling weapons? Another Public Service Announcement from Rian Johnson
Why not have a little propaganda in the middle of the movie? Rich people are evil, but not Disney who brainwashes kids to buy mindless toys so the average family can’t even afford a $500 emergency payment, the rich people who sell weapons that ushered in the longest era of world peace in history are to blame!
Weapons bad! Toys good! Charge them to your credit card!
Diversity montage time 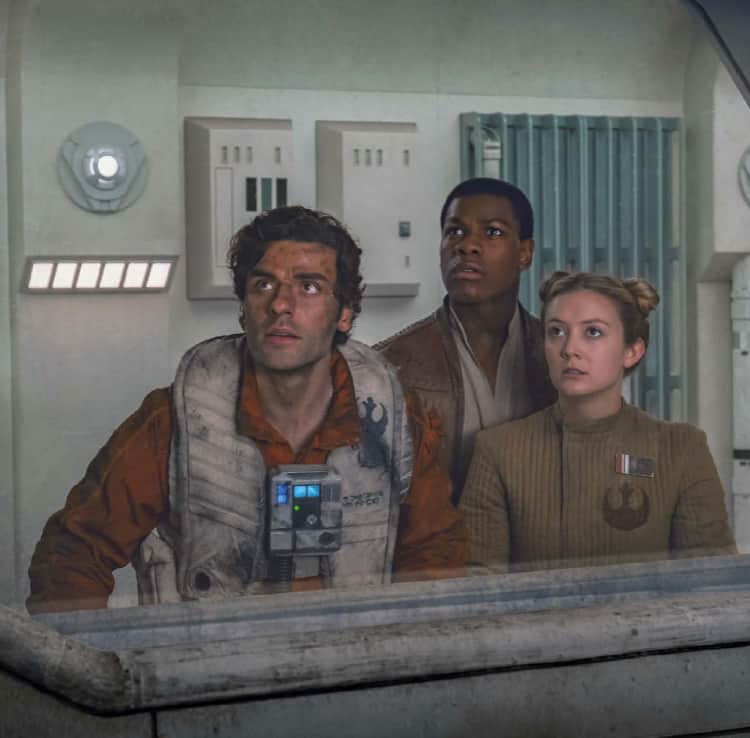 We see this girl 10 times and I have no idea why I should care about her. Something happens, the scene cuts to her nodding in approval, and then the movie continues flashing mug shots of people of every ethnicity and age for 5 minutes until all the viewing demographics are pandered to appropriately.
DIVERSITY!
She’s a strong woman who don’t need no man
A feature of our culture is that it’s strongly pro-woman. 80’s movies were over-the-top masculine, steroid fueled, murder fests. Popular series today put women in the leadership roles:

Disney princesses no longer have Prince Charming coming to rescue them, the princesses have bumbling male sidekicks who need to be saved from themselves.
Star Wars tries to follow this pattern by murdering the entire command structure at the beginning of the movie so they can give more screen time to Leia and Admiral Purple Hair. That’s all fine and good, except for two things.
First, Leia has to survive the blast that killed everyone else, and then magically fly through outer space without a space suit. It’s easily the most ridiculous scene in the movie. They couldn’t have thought up a reason why Leia wasn’t on that exact ship?
Second, Carrie Fischer had passed her prime. A life of drugs left her voice gravelly as Johnny Cash. Her face had so much botox and plastic that she could have doubled in the Lego Star Wars movie.
Worse yet, there was no reason for Leia to be in the story other than to have Rey’s mother die in Episode 9 (which they will now have to do entirely in CGI). Everything Leia did in The Last Jedi could have been done by Rey/Finn/Poe/Rose.
Public Opinion
Professional reviews, which I highly suspect of getting Disney kickbacks, overwhelmingly love the movie. Public support is strongly split 50/50.
Here’s a Reddit comment reviewing The Last Jedi:

The way the story is now has taken away any anticipation of the final episode. There is no real climax anymore. Rey already bested Kylo Ren in episode 7, there is zero doubt she will again. I have zero interest in what happens to Finn now either as he just seems pointless, I cannot imagine what he can do other than being a useless side character now.
The Last Jedi really fails in raising the stakes for the conclusion, if anything, it lowers them.

Know why the The Last Jedi “fails in raising the stakes for the conclusion”? Because the conclusion already happened! Stories are constructed to emotionally manipulate the audience (in a good way). The problem is that The Last Jedi screwed up the order of the emotions by releasing the tension too quickly. No one fears Kylo Ren, a “master” who got beat by Rey and Finn. [Perhaps] the most loved character of the entire Star Wars universe, Han Solo, was killed off in The Force Awakens. Rey and Poe, likely love interests for Episode 9, just met at the end of Episode 8!
Star Wars Episode 9 spoilers
Episode 9 hinges on the brother/sister “twist” to be the climax, as well as the death of Rey’s mother, the whirlwind romance story, and Poe getting captured and tortured. How do I know this? Because there’s no scenes left for them to copy from the original trilogy. Disney has copied scene-for-scene 2/3 of the original trilogy on their way to making $10 billion. Do you really think they are going to stop now?
There’s also no one left to die. Kylo Ren and Leia are goners, for sure. It’s hard to see Kylo becoming Ben again and everyone just forgiving him for killing billions of people. He would have to self-exile to a distant planet a la Luke/Obi-Wan/Yoda. Maybe Finn and Rose pull a Thelma and Lousie and sacrifice themselves for the greater good, but I put that at a 0.0001% chance. I guess they could kill off Chewy? We could watch a moving death speech in Wookie where he tells Rey she’s Han and Leia’s kid.
Random tidbits


Why can’t Disney surprise with Episode 9?
Because Disney will make $15 billion for the trilogy movies alone by merely copying the originals. And they’ll make another $20 billion from licensing and toys. Don’t fix what ain’t broken. Don’t even touch it. GET AWAY FROM THE PILES OF MONEY!
The missing scenes from the original trilogy will be baked into the eventual turd-pile that will be episode 9:

Oops, that last one is just wishful thinking.