Cusco, Peru is the second stop in our round the world trip.  Our stay in Lima was to get our feet wet in a big, foreign city before heading out to where there would be less English spoken and things would get more “authentic”.
Well, that place has to be further down the line, because it’s not Cusco.  Cusco is a cute little town that is currently used as a stopover on the way to Macchu Pichu.  Historically it actually used to be the capital of Peru when the Inca’s were in charge.  Today it houses a shockingly large collection of college student / backpacker types on an assembly line churning towards Macchu Pichu. 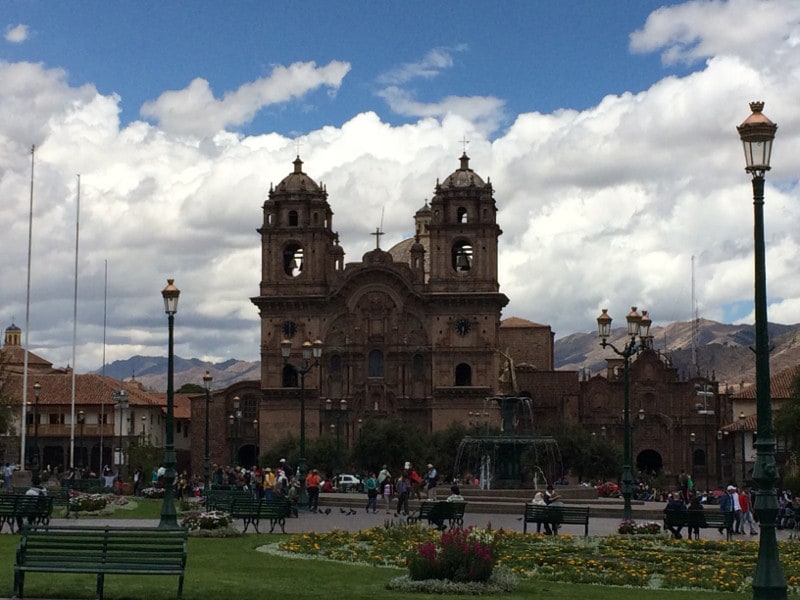 Don’t get me wrong: Cusco is a beautiful city with a lot of charm and things to do.  I guess I had just pictured it to be a little more… traditional?  Isolated?  That probably shows the naivete on my part.  But, back home, people aren’t really talking about trips to Peru.  They are typically talking about European or South East Asian vacations.  I think I have a cousin or two that have been to Peru, but literally don’t know of anyone else.  Anyway, there’s a lot of gringos here and we felt like we should all get together and play Ultimate Frisbee or something.


Here we learn a few things about Peruvian towns that seem to be common themes.
1. There’s always a plaza (similar to European towns).  Think of it like a central town square.  People meet there to celebrate, talk, or just hang around.  We saw things every evening, ranging from graduations, weddings, protests, and one evening a bunch of students organized a “flash mob” in the streets (basically did a spontaneous and coordinated dance number between the 50 of them).
2. The Inca love aqueducts – little gutters lining the streets and houses used to transport water.  These act as primitive plumbing and rely solely on gravity.  The Inca built near hills to facilitate this building style.  To be clear, I’m talking about the Inca empire that was in the 15th and 16th centuries: many of the foundations and building layouts are still intact!  Yes there have been some maintenance, but it’s still interesting to see cities that are older than everything in the US.
3. Adobe brick and clay shingles are used everywhere.  Adobe is just mud and straw, just like the Inca used.  Still in use today as building material.
4. Inca?  Inca.  Inca everything.

The streets and buildings in Cusco have a more European feel to them.  Everything is tiny and obviously built pre-automobile.  There’s parking exactly nowhere in the city and it seems that owning a car is more trouble than it’s worth.  The cobblestone streets and stairs can be painful on the joints since the town is on a constant slope, and it’s during those times where it’s best to pop into a coffee shop or restaurant to relax.
Touts are everywhere trying to get the tourists to part with their money.  It can be tiring to constantly fend off the barrage of people offering their services.  The cuisine in Cusco ranges from authentic Peruvian to modern cross-culture fusion.  There’s even a little Irish Pub right on the plaza that’s very popular at all hours of the day. 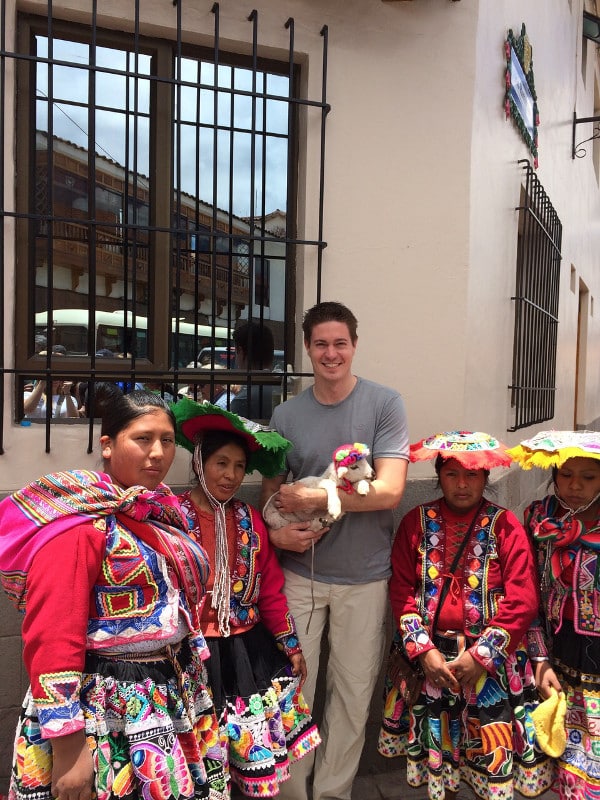 Here we have me posing with a baby alpaca with a group of locals.  The locals sit around the town in traditional garb and wait for idiots like me to want a picture.  Because I was tired, I forgot to ask how much beforehand.  Always ask how much beforehand when dealing with people in other countries, lest they just make up a number at the end.  Which is exactly what they did here: they wanted $20 USD for this picture, which they weren’t going to get.  They also wanted $5 per person, which still comes out to $20.  I suppose if you’re dumb enough to want a picture like this, you might not know math very well.  However, I’m not about to screw someone totally so we gave them $7 and I made a mental note to always ask how much prior.
Why did I start talking about food but showed this picture?  Because later that evening we had alpaca for dinner.  It has the texture of tough beef and tastes similarly but less robust/flavorful.
We stayed in a little B&B style house roughly 10 minutes’ walk from the Plaza which mostly dictated how our days went (hint: we did everything to get away from there).    During the day we tried various activities, walked, took tours, and tried to sample as many local places as we could in our time there. Oh, and dodged tourists.  Dodged so many tourists.