We went around the world for 365 days exactly. Went to 17 countries in that time across South America, Oceania, South East Asia, and Europe. Here’s our top 10 and bottom 10 experiences.
Top 10 experiences, worst to first
10. Boat tour in Sibenik, Croatia
We met so many wonderful people on our trip that I could fill the top 10 with them alone.


The guy runs a boat tour service and the other girls are friends of his. They took us to their home for lunch and then out to swimming spots. We then went to a 16th century fort and jumped off of it into the water. If I hadn’t jumped out far enough, I’d have broken every bone in my body. Scary stuff. Good thing I had been drinking!
Related: this is the weirdest thing I’ve experienced in a 16th century fortress. They were just standing there rocking out.
9. Angkor Wat, Siem Reap, Cambodia 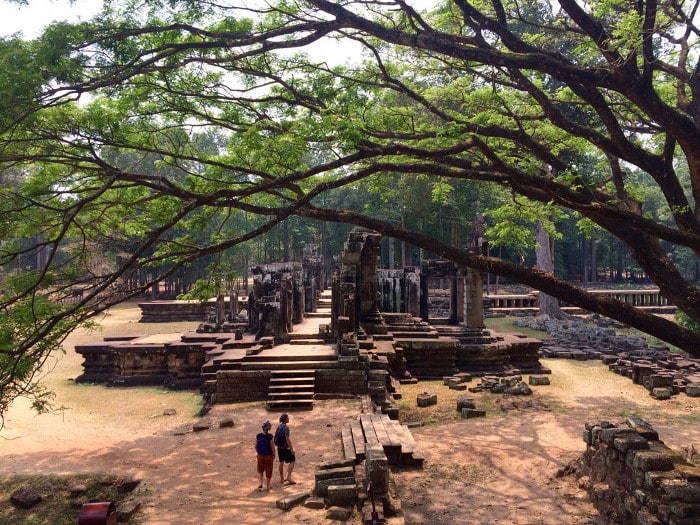 Easily the most impressive religious site we saw*. The ruins go on forever. Stupidly, we rented bikes and experienced dehydration in the 100 degree heat. A full day of biking and we only saw 1/4 of it.
*No Machu Picchu didn’t make this list. Pretty sure it doesn’t make my top 30. Don’t hate the messenger.
8. Robot Restaurant and walking around Tokyo’s red light district 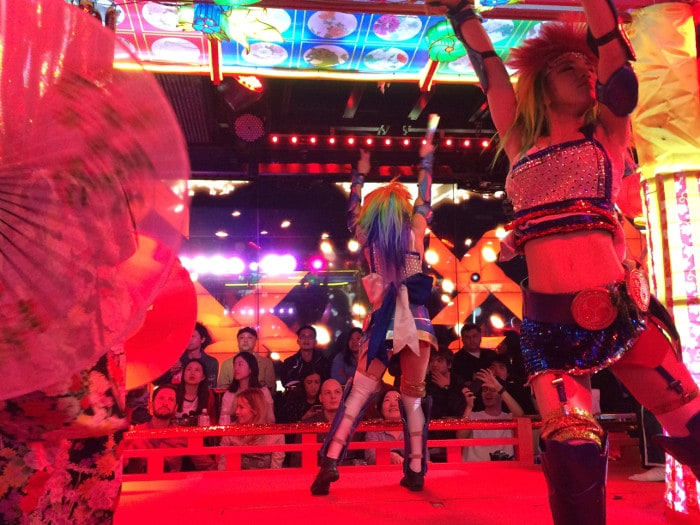 Robot restaurant is an experience not unlike Cirque du Soliel. It’s a visual spectacle that you have never seen before and will never see again. A short video of a piece of it.
7. Oktoberfest

At first it reminded me a lot of the Minnesota State Fair. Booths and tents and a pile of people. Then the madness starts as people start standing on tables and singing and pounding beer that only comes in one size: gigantic. Soon there are people passed out in the streets. Others are bleeding all over the pavement from fist fights. Despite all that, I still felt safe as there’s infinite police around during this time.
I’m not sure I’d go back, but for a one-time experience it was pretty great.
6. Cooking classes and EatWith.com meals

When you #travel, you have to do @eatwith. We've done it in 4 countries, and it's always a highlight. pic.twitter.com/6dBjzMqVjp

Both cooking classes and EatWith.com are great ways to meet and talk to locals and have authentic food. We did them in Tokyo, Istanbul, Myanmar, Thailand, Peru, Argentina, France, and Croatia.
The French guy above was telling a joke about how the French work hard. (Whoops, he was serious!)
5. Climbing a mountain over Delphi, Greece and hiking to a faraway cave 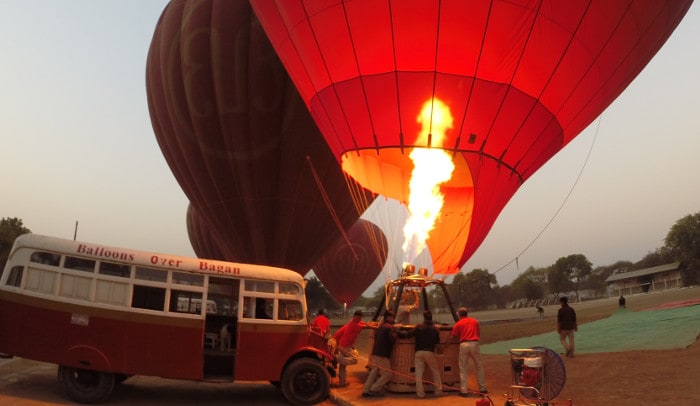 Expensive at ~$600 USD for two people in a group ride, but absolutely worth it. Bagan is an area with thousands of temples. The ride at dawn was just magic.
3. Swimming with sea lions in the Galapagos islands, Ecuador
I was chased off by a male protecting his harem. Those are HIS bitches! A male is only head of the harem for a few days. It’s hard defending all day and sexxing all night.
It’s also quite the shock coming up from swimming to be face-to-face with a sea lion sunning himself on a dock.

Sea lions take the public benches because they are cooler than sleeping on the ground. #Galapagos #digitalnomad pic.twitter.com/U6paU06vlD 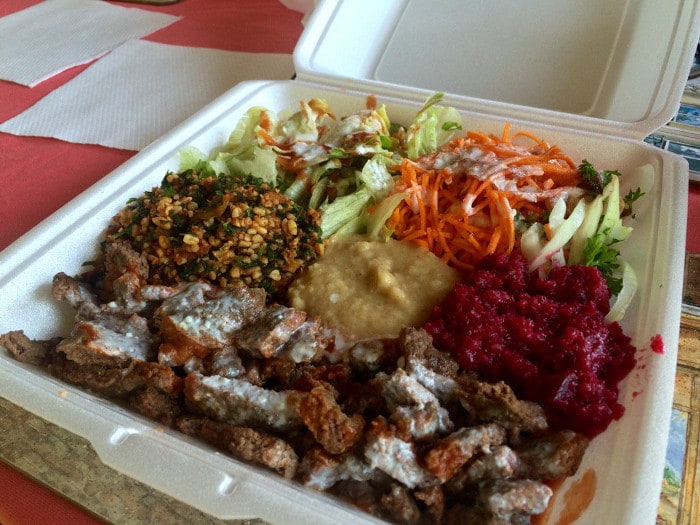 The fast food of Europe is kebab. It’s slow roasted, shaved lamb with lettuce, carrots, and other fixings or sauces. It tastes great and is actually healthy. To find it in the US, go to a Greek restaurant and order “gyros”. Don’t try the fast food chain Dino’s Gyros because that crap is terrible and terrible for you.
1. SCUBA diving the Great Barrier Reef, Cairns, Australia


Imagine yourself in a zoo playing with the animals. Then imagine you and all the animals are tripping and you’re floating through space and time in a dream-state. That’s the closest I can get.
Get certified while diving abroad.

Bottom 10 experiences
No I didn’t like that place that’s your total favorite. Please get all worked up and spend time typing a long response to someone over the internet you’ve never met. Then delete said response and get on with your life. Thanks.
10. Graffiti all across Europe
Europe, you’ve lost your spray paint privileges. Your cities are incredibly ugly due to this mess. It’s unreal how pervasive it is. A random shack in the middle of a field 50 miles out of town will have spray paint on it too. If someone tries to remove the paint or put up an artful spray, it’s scribbled over by assholes. The entire continent has just given up trying to fight it.
MISSING: a picture because your cities are fugly
9. French cuisine 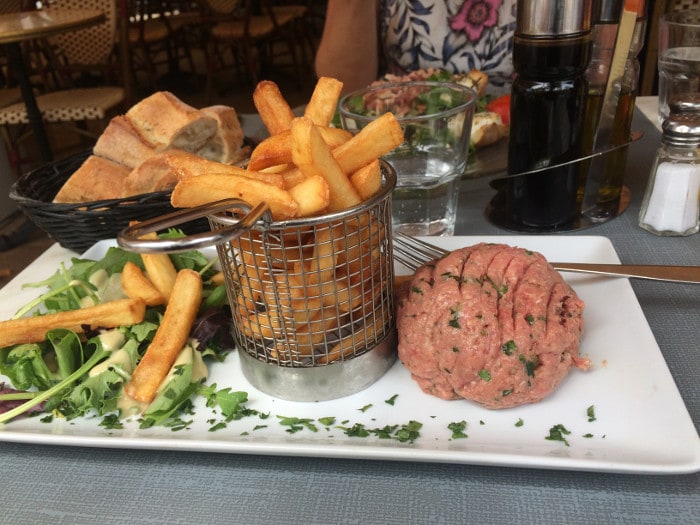 This is beef tartar. It’s a baseball sized piece of raw hamburger on a plate. You can tell it’s gourmet by the knife marks they hastily put in it. “French fries” are called as such because the French have no other side dish. It’s almost always fries, and they are usually the limp greasy ones and not good. The only good meal we had was in an EatWith dinner. Everything else was just mediocre bar food.
8. Paris, the city of urine, scammers, and thieves
Paris looks nice on the movie screen because you can’t smell the horrible stench of hobo piss that pervades the city. Movies also don’t show the graffiti that covers everything. Walking into a subway, the smell of urine nearly knocks you backward. The smell comes from the hordes of homeless peeing everywhere. Don’t want to see unwashed hobo penis? Too bad, it’s going to happen. How’d this city gain the reputation of being romantic?

The most common sign in Paris for tourists. #digitalnomad #travel pic.twitter.com/k6i4xwYYti


This is the most Buenos Aires picture I could take. Dog crap capital of the world.
6. Experiencing Peru’s modern day slavery
Peruvians are poor by any metric. But even they have full-time maids and childcare because the Quechua (local indigenous people similar to Native Americans) are even poorer yet. Imagine someone in the US making $15K/year having a full-time maid who takes care of the children, and you get the idea. Quechua build their homes out of mud. Their ovens are made of mud too. They still use aqueducts made by the Inca and farming practices used thousands of years ago. Oxen yoke you literally see in museums about ancient cultures long extinct. We visited people making clay shingles for houses. Their “tools” were an old construction worker’s helmet they were using for a pail and a few boards nailed together. Shovels were simply their hands. 12 hour days in the blistering sun.
5. Smoking in Europe
The cities are filled with the litter from smoking. Trying to enjoy your meal is nearly impossible as people light up all around you. Smokers: you are assholes.
4. Myanmar cuisine

Fish sauce is used a lot in SEA, but the Burmese take it to a new level. They put it on everything. And this fish sauce smells and tastes like 3 day old, sitting in the sun, rotting fish. So your eggplant will taste like rotting fish. So will your rice. So will the chicken. Don’t like the taste of rotting fish? You came to the wrong country, bro.
3. Food poisoning in Pai, Thailand
We spent a week laying on the concrete floor of a moldy, wet-bathroom while spewing liquid out of every orifice. The worst part about food poisoning is that you can’t sleep. There’s a persistent pain in your kidneys that prevents it.
2. Disney Paris
The rides were decades out of date. The park was very dirty and smelly, largely due to all the smoking in the park (technically smoking is limited to certain areas, but no one cares or enforces it). And the worst part was that half the rides close for lunch and dinner because the French need their 2 hour lunch and dinner breaks. This kills the fast pass system and greatly increases the wait time for rides. 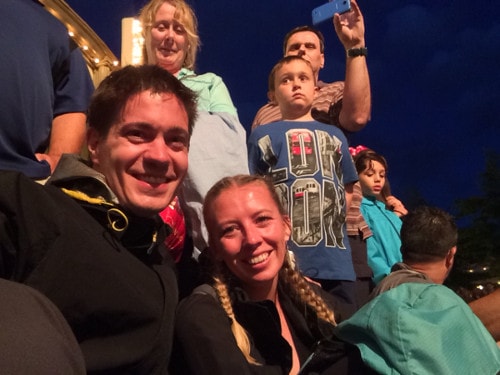 This picture was after the park’s final kick in the nuts, where all we could do is laugh. The 5 other Magic Kingdoms around the world end the day with a light parade that’s quite spectacular. So we waited for 30 minutes for the parade to come around. It was Elsa and Cinderella in a horse-drawn buggy, waving to the crowd. The look on the children’s faces behind us tell the whole story. 7 years old and already dead inside.
1. Pai, Thailand in general 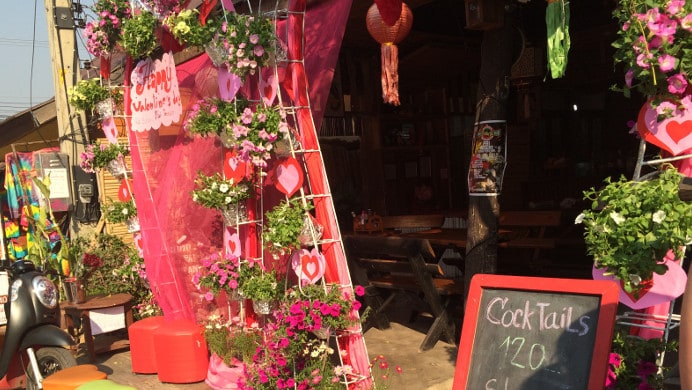 A cute little Thai town was destroyed by Western failures looking for a cheap place to get drunk.