A common question in entrepreneur circles is:how much should your business charge for it’s service or product?
I’ll give you three stories. Two of them involve Audi, and that’s not an accident.
Alicia got into the Audi A4
The A4 was her dream car that she wanted after college. Her previous car was a Volkswagen Jetta whose lease was coming to and end. This was our first test drive and she was excited…
…until she looked down at the door handle. It was the same as her Jetta. And the dashboard was the same as the Jetta. The entire interior of the Audi A4 was the same as a car costing $20K less! Sure the car had more horsepower and looked sleeker. But Alicia couldn’t shake the feeling that the car was just a re-branded Volkswagen Jetta. Her dreams of an Audi A4 were crushed.
So we looked at other luxury vehicles and were disappointed. Lexus’s were re-branded Toyota’s. The Porsche Cayenne was a re-branded Volkswagen Touareg. It was down to Land Rover and BMW because those were the only brands that didn’t obviously share parts with cars tens of thousands of dollars less. She went with a BMW x5.
We knew that we were paying an up-charge for the brand. We were paying for exclusivity. A brand can charge disproportionately more for exclusivity, but they do have to give more in return. The A4 didn’t give enough.
Audi Quattro Club at Excel Energy Center 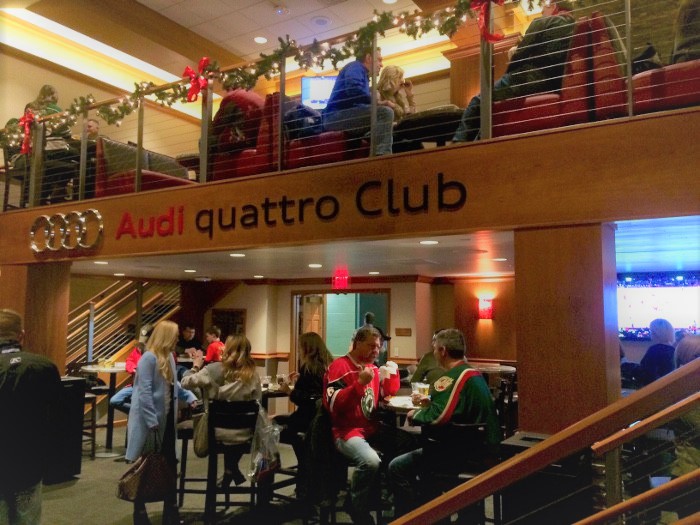 Rinkside tickets cost $450+ for a Minnesota Wild game. Tickets for row 3, literally a few feet back from the rink, cost $150. The viewing experience is actually worse rinkside than 10 rows up. The refs and plexiglass posts block the action. The jumbotron is hard to see because it’s right above you. How can they justify the charge?

The seats around the rink are exclusive. The players crash into the boards, flexing the glass and knocking off drinks and phones placed on the ledge. The seats are leather with the Audi logo stitched into them, further differentiating them from normal seats. You also get the benefit of banging your hands against plexiglass in celebration. Who knew that people would pay triple to hit inanimate objects?
The final benefit is the Audi Quattro club. There’s free food, beer, and wine in this club. Of course it’s not exactly “free” because no one could possibly drink enough 50 cent light beer to get their money back. The point is the exclusivity. Even the name “club” insinuates that some people belong and some people don’t.
Getting to the club is oddly difficult because it’s not well-marked. On purpose. Club members have to go through the back corridors of the arena where most people are not allowed to go. On the way to the club you pass by the press lounge and player entrance. The arena itself is beautiful and clean. The back tunnels to get to the club are ugly and not meant to be seen by “normal” customers. Club members are “different”.
The Audi club, just like Audi cars, is a brand that allow people to pay more simply to signal to other people that they are different. I think the Audi Quattro club gave enough value for the price.

The best salesman I’ve ever seen
The prospective client asked “How much does it cost?”. The salesperson replied: “What does your budget look like for this quarter?”. The client responded with a number. The salesperson told the client that he was in luck: the product cost exactly that amount! How lucky!
Over the years I’d see this salesperson sell the same software product for $500 and $50,000. He was also the owner of the company and was very successful.
This same salesperson took clients golfing and out to lunch and dinner. Because it made the clients feel important. These clients would spend hundreds of thousands of dollars per year with with the salesperson. The lunches and golf trips cost a few thousand dollars and yielded a 100x return.
I’ve worked at another small company that charged every company the same amount for their software. They didn’t allow clients to pay for the opportunity to feel special. They didn’t take clients out for lunch. The company struggled and ultimately stopped selling software.
Maybe you think that it’s unethical to sell the same thing at different prices. But that software had different value to different companies. A company with 5 users wasn’t going to pay a lot because they couldn’t get much value from the software. A company with a dozen worldwide offices and tens of thousands of users would get a ton of value from the software. Why should both companies pay the same price?
People pay for an Audi car because they want the appearance of luxury. People pay for rinkside tickets for the exclusivity. Businesses pay the amounts something is “worth” to them.
People will give you a lot of money so that they can feel special. But you have to let them.
Other people will want the best value without the emotional niceties. Offer clients and customers this option too, just like Volkswagen is the cheaper Audi and the rink has cheaper seats with excellent views.
Your pricing strategy should be fluid
Pricing client to client is time consuming at the beginning, but a real time saver overall. If a client is trying to haggle on price, remove features. If a client wants more features, raise the price. All parties should be happy with the price and features.
There are clients that want a lot of touch and face-time. Those clients pay more because that’s time consuming to you. But it’s worth it to them to have more meetings. I’ve had clients be unhappy because while performance was strong, they really wanted that high-touch, constant meetings and face-time experience.
There are other clients that just want the work done with the least amount of hassle possible. Those clients can pay less. This benefits both provider and client because meetings are a disproportionate time suck.
Every client is different, so every price should be different
Figure out of your client or customer is an Audi or Volkswagen person, and give them that. Offer a no-frills value package for your money conscious consumer and a luxury package for those willing to pay for the best. A luxury client won’t be happy without special options and a value client won’t be happy paying for luxuries!
Don’t fall into the trap of thinking that everyone paying the same price is “fair”. Pricing middle-ground will make everyone unhappy. Luxury customers will look down on your product because it’s not exclusive enough. Value customers will think your product is overpriced. And you’ll be broke because no one is buying.