Bagan, Myanmar is known as the spiritual center of the country with it’s miles of pagodas and terrible food.  Fine, most people just think of the temples.  The Burmese have a saying that you’re not a real Burmese unless you’ve gone to Bagan.  It’s a location that attracts tourists from all over the region in addition to international travelers. 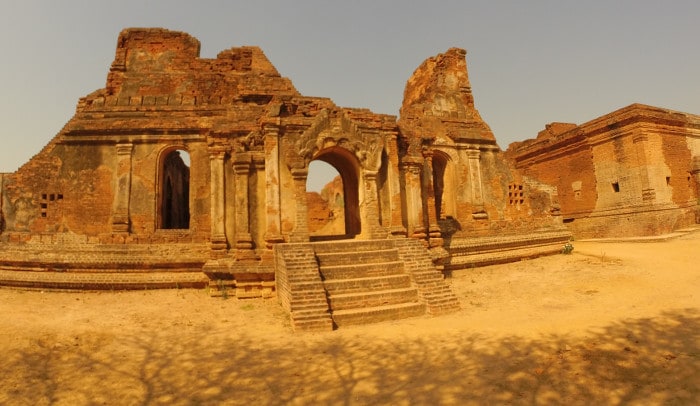 The ruins were built in an explosion of religious fervor during 800 AD – 1200 AD.  There used to be over 13,000 temples in this region, but the number dwindled to around 1,300 recently due to the normal reasons: invading Mongols during the 12th century, earthquakes, protests, and general wear and tear.  The pagodas are still in use today.  Many of these have monks that live right next door and pray every day in them.  There’s a small community of monks that live behind the ruins above.
Going to see the sights in the old fashioned way 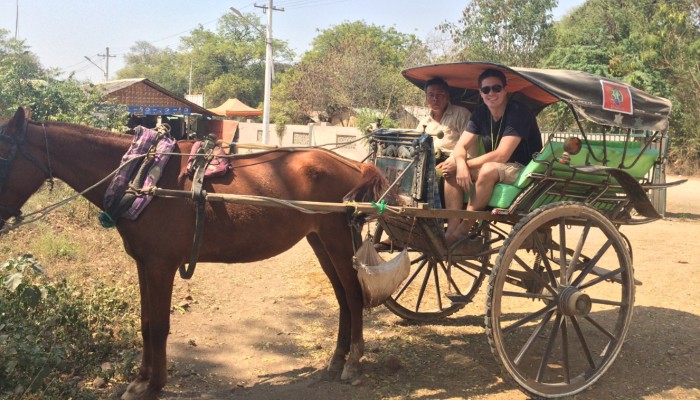 Sure there are motorbikes and electric bikes available for rent everywhere, but it seems more fitting to ride behind a cart pulled by a horse to go and view thousand year old ruins.  Besides, the roads are quite sandy and traffic laws are more like traffic “suggestions”.  After seeing the litany of leg injuries that tourists had in Thailand from scooters, we decided this would be safer and charming.  Until the horse started peeing and some was splashing back.  That took away a tiny bit of the charm. 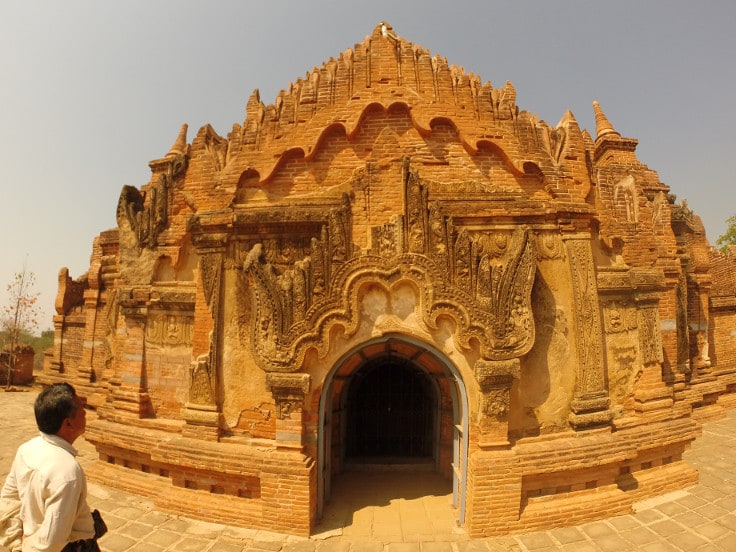 You may differ, but I like the fish-eye effect the go pro gives this pagoda when close up.  The area feels surreal in a way that’s hard to be captured by photography.  Well, at least with my limited skills.  There is great attention to detail in the stonework.  Engraved in this pagoda are various spirits, gods, and snakes.  To protect these sites, a government worker is assigned to them to make sure people don’t desecrate them. 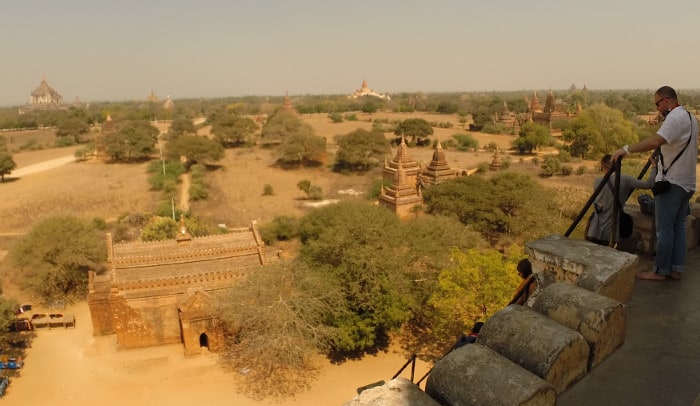 The landscape is very similar to this: miles and miles of temples dotting the landscape.
It’s not all spiritual harmony…
There’s “New Bagan” and “Old Bagan”.  The old city is near the waterfront and dead-center in the sprawl of pagodas.  In ’88-’89, the government told the citizens of the town that they had to move 4 miles to the south so that they could better preserve the pagodas (presumably).  Did the people get money for their trouble?  Nope.  The government just said: LEAVE.  So they did.  Asking the locals about it, there’s no complaining.  People aren’t really comfortable criticizing their government very much.  But New Bagan seems to be doing OK.  There’s even a large complex going up that will become the new center of town market.
The Burmese don’t have a lot 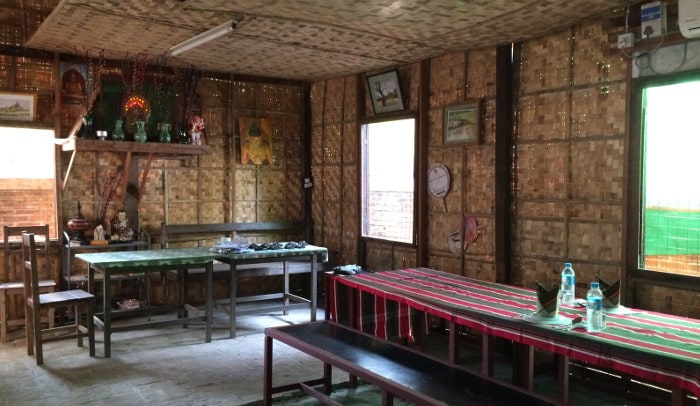 This is the inside of a Burmese home.  The walls are made from thatched bamboo, and the roof is either bamboo as well or made of sheet metal.  If I got a running start at the wall, I’m pretty sure I could take down the entire building.  The table is where the living room used to be a week before we got here.  This person had so much business that they needed to move next door and turn this building into a dedicated hosting space.
The average person in Myanmar makes $40 per month.  Please, for the love of god, don’t try and haggle for 50 cents.  Sure, if the cabbie is trying to charge you $5 on a $1.50 fare, that shouldn’t fly as they are just grossly taking advantage.  But when a vendor on the street charged me 300 kyat (30 cents) for a bottle of water that should be 100 kyat (10 cents), who cares.  Tourism has helped with money coming into the country, and the people running tours and classes have more of the modern accouterments such as smartphones and cars or motorbikes.
Abandon all hope when it comes to the food

We’ve tried for weeks to find something that we enjoy in the Burmese cuisine, and just haven’t found anything.  For the first time on our trip, we are actively seeking out Western food instead of local.  After taking a cooking class in Bagan, a food tour in Yangon, and trying local restaurants or street food for every meal. While we did have some good food on the tour it was only accessible if you speak the language or had a guide with you – half of what we ate was not even listed on the menu. We give up.
There are a few big issues I have with the food:

End on a high note 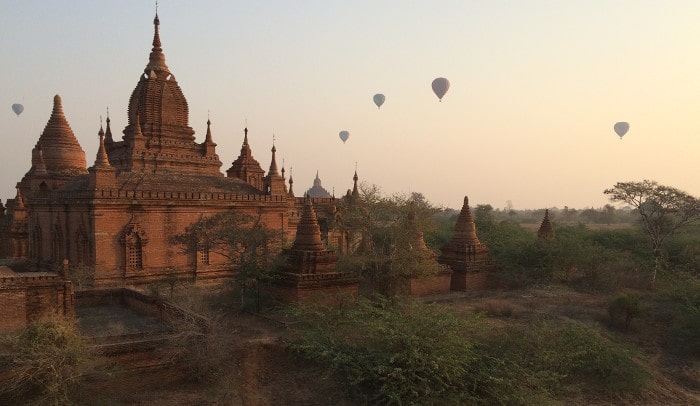 The highlight of our time in Bagan was certainly taking a sunrise hot air balloon ride over the fields of temples.  We went with Balloons over Bagan, a company that has been doing this since 1999.  When they started, they did 280 passengers with one balloon.  They’ve since grown and are on pace to have 20,000 passengers this year!  They are a wonderful organization and everything went off without a hitch.  They believe in giving back to the community, paying their crew higher wages than normal.  There were roughly 20 balloons in the air taking off just before sunrise, creating a pretty spectacular scene.
The hour long ride was pretty quiet as everyone was just in awe of the surroundings.  So instead of too much typing, here’s just a bunch of hot air balloon porn! 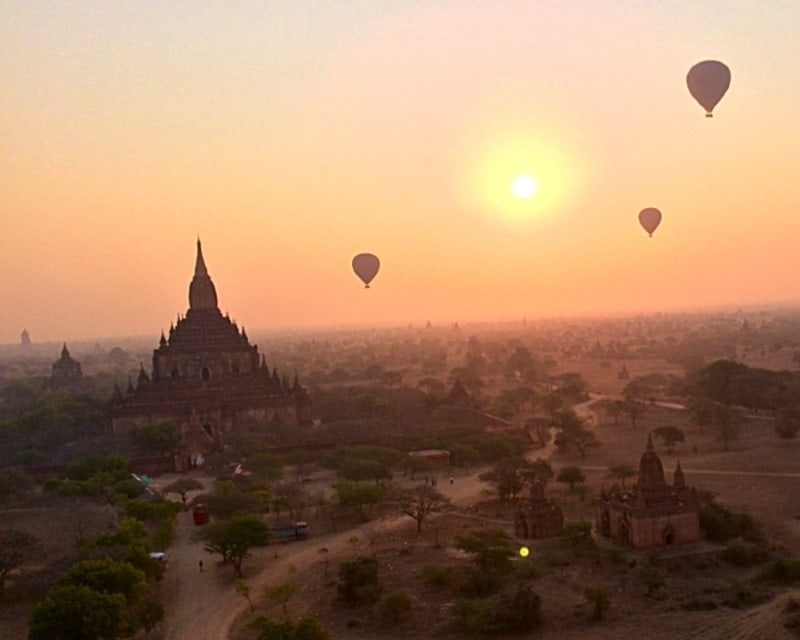 truly amazing views from the hot air balloon at sunrise 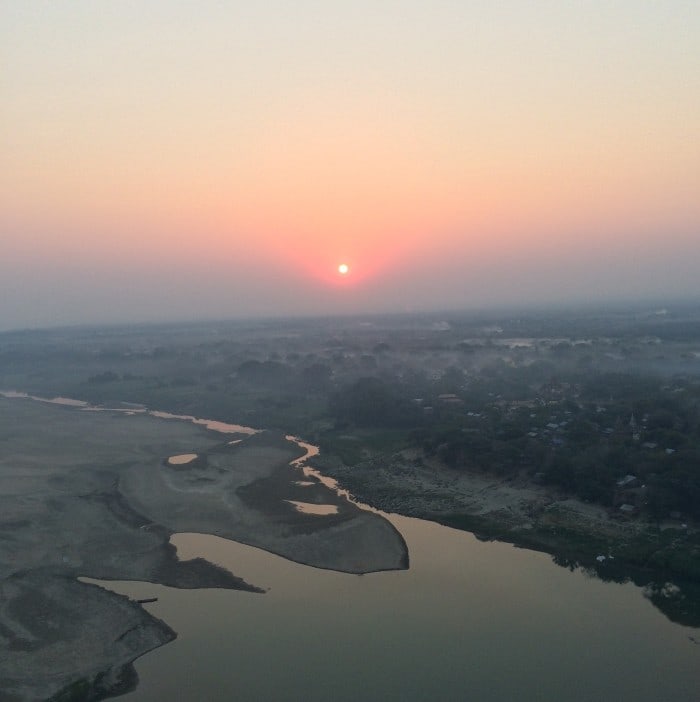 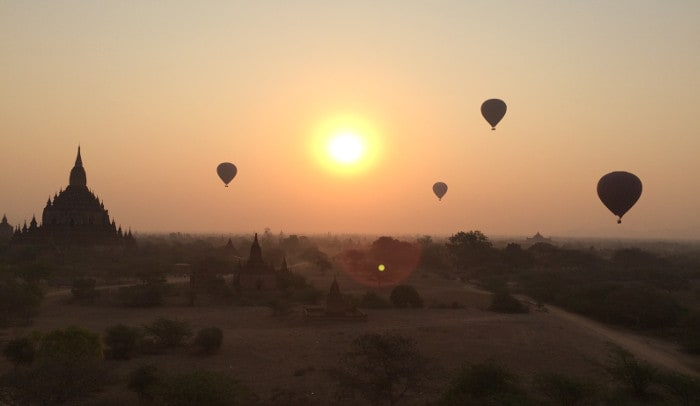 We’d get close enough to temples where you could reach out and touch them. 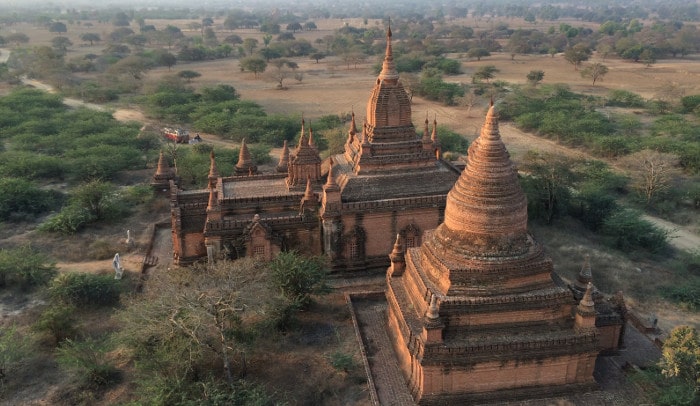 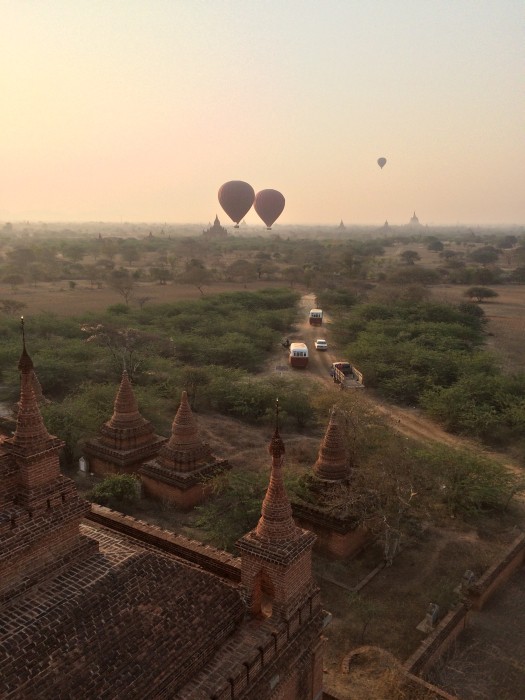 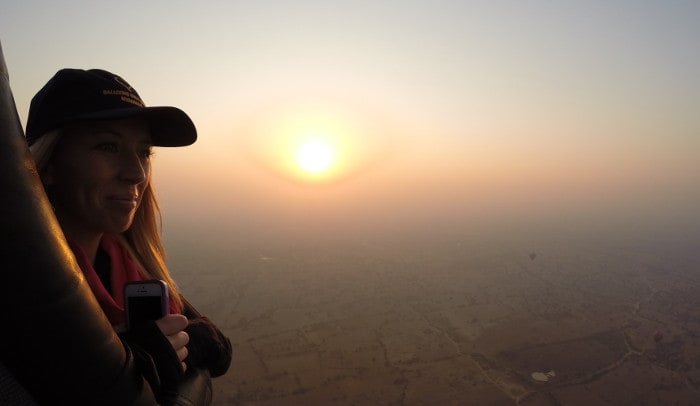