Argentina can be tricky for tourists, so here are some Argentina travel tips.  We stayed there for roughly a month over a few locations, and had a pretty good of how to get by.
Getting There
You do need to pay the reciprocity fee or you won’t even be allowed onto the plane.  This fee can be paid online and must be printed out before your plane boards.  Show up at your gate early as they will call your name over the loudspeaker and/or come around to verify you have this completed.  We saw several people not be able to board the flight because they didn’t have it!
Where to get money in Argentina
If possible, try to bring USD with you before going to Argentina.  Their inflation is 20% per year (yikes!) which means no one wants their currency.  A black market has cropped up around USD: everyone there wants it and is very eager to give you pesos in exchange.  You will still need to convert to Argentinian pesos for general use, but the higher priced items/services are going to want USD.  Bringing it avoids the conversion fees in the first place.
The official exchange rate in Argentina is going to be the worst that you can get.  This will be the one given to you by ATM’s and banks.  Sometimes it’s a necessity to withdraw from an ATM, but most of the time you’ll want to exchange on the black market.
Don’t worry!  The “black market” isn’t quite the seedy operation that it sounds like.  Well ok, it kind of is and it kind of isn’t.
There are two ways to go about exchanging money: one is to simply walk around the city and listen for the people saying “cambio! change!”.  Don’t worry, you will find them around malls and tourist attractions.  These are money changers that will give you pesos in return for USD at a greater rate than the official rate.
The better way that we found was to use xoom.com.  It does the same thing, but without going to a sketchy looking guy in the street.  Use it like Paypal: input your bank information, request the amount to withdraw, and then go to one of their approved locations and pick up the money.  Their approved locations aren’t always the most convenient, but they are typically numerous and in safe areas of the city.  This way you can avoid doing back-alley deals.  We check for fraud diligently, and Xoom is legit.
Eating in Argentina – Time of Day
Time of day is very important in Argentina.  They are on their own clock and it can be very confusing for tourists.  Lunch is around 1pm-3pm, and dinner is from 8pm-12pm.  Picadas are from 5pm-7pm.  Restaurants are often completely closed at other times!
First: breakfast isn’t really a thing here.  If you find a place that serves breakfast, great.  Don’t count on it.  You’ll probably be able to find a coffee shop that serves some bread on a consistent basis.  Having a hotel that serves breakfast may impact your decision.
Next, lunch is a little bit later than normal.  Some will start around noon, but don’t expect to eat at 11am.  When 3pm rolls around, the kitchen will usually close.  So don’t roll in at 2:50 and expect to be served.  They will shoo you out the door.
“Picadas” in Argentina are appetizers and drinks.  Think of it as happy hour food.  Typically they will be a meat, cheese, and olive tray.  This is to tide you over until dinner.
Dinner in Argentina starts late and ends late.  It’s possible to arrive for dinner around 8pm, but this is like going to dinner in the US around 4pm: you will be the only ones in the restaurant.
What to eat in Argentina
Argentina is very proud of it’s Italian heritage, and the cuisine reflects that.  The food is meant to stay simple and true to itself.  There will very little preservatives or spices in the food, making it quite healthy even when eating out.
I swear the menus all look the same here: big and confusing.  In the US, the menus are grouped by item and the options (onions, pickles, cheese, etc) are underneath.  In Argentina, each option is listed separately as a different item.  For example, a sandwich without onions will be listed as a completely different sandwich as with.  So the entire page will be basically the same sandwich, but with different cheeses/breads/etc.  Don’t get discouraged.
Meats and vegetables, grilled – this will be the go-to large meal.  Their specialty is beef, but all other meats are on offer as well.
Milanesa – This is simply breaded chicken, and it’s very common in both the restaurants and grocery stores.  I’ve tried it all over the place, and I can’t figure out why it’s so popular.  There doesn’t seem to be much special about it.


Picadas – a meat, cheese, and olive tray that is typically served around 6-7pm to tide you over until dinner which can be as late as 11pm.  There will often be specials and it can be a very cheap way to eat dinner since they can be quite large.
Pizza – There are literally two varieties: cheese, and cheese with onion.  In short, the pizza here is terrible.  They want to keep it close to the basics as possible, so the pizza is invariably just cheese bread with no sauce.
Empanadas – These are meat and cheese pies that are available all over.  They will be good cheap eats.
Napkins in Argentina 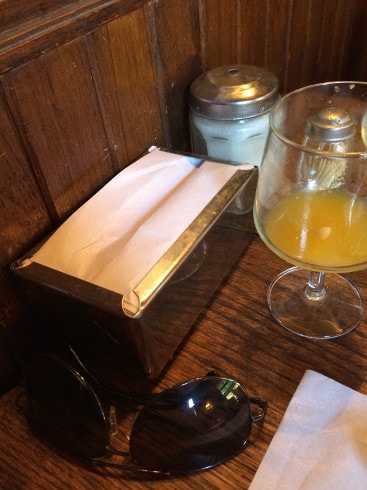 Why do I mention these?  Because they the worst napkins in the entire world.  They feel and act like wax paper.  If you try to soak up water-based liquid with them, they will fail horribly.  You’ll just be smearing it around.  Their one and only use is to soak up grease-based spills.
What to drink in Argentina
While Quilmes is an OK beer, you really should drink the wine to the exclusion of all else (except water).  In the local stores, great bottles of wine can be found for under $2 USD! 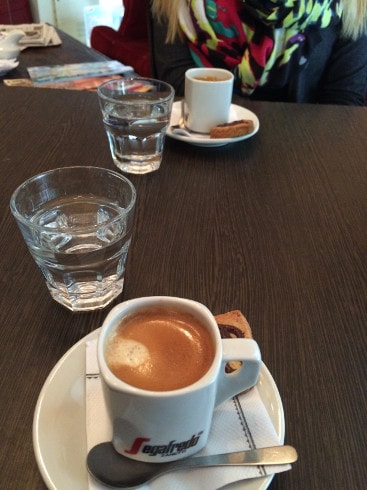 Coffee in Argentina will come with a few side items that we aren’t used to: a shot of soda water and a sweet treat.  They are welcome additions and you’ll miss them when you leave.
Where to shop for food in Argentina
Make it a point to stop in the local stores for one simple fact: it’ll be cheaper.  The government regulates the price of certain items such as eggs, but only on the large retailers.  The little shops don’t have to follow these rules for whatever reason.  In Buenos Aires they are referred to as “Chinos” as they are typically run by people of South East Asian descent, and they can be found all over the city.
Hotels / Airbnb in Argentina
It’s no secret that we are big fans of Airbnb.  We have gotten entire apartments for under $40 USD per night in great locations.  However, there are some caveats:
You might have to squeegee your own floors.  The apartments in Buenos Aires are often old and leaky.  The host will tell you if you are expected to mop or squeegee the floor.  Don’t worry, it’s not too bad.
The showers are all terrible.  There’s mediocre water pressure anywhere, and poor tubs abound.  So if your host expects you to squeegee your shower, don’t be too surprised.
Having said all of that, if you just keep your expectations a little lower than everything will be just fine.  Charming, even.
Look where you’re walking
The sidewalks aren’t exactly well maintained.  Moreover, in Buenos Aires there’s a large problem: dog poop.  It’s everywhere.  You are nearly assured of stepping in it at some point during your time there.
Do they speak English in Argentina?
Not a lot.  I was kind of surprised by this, but they seemed to speak less English here than in Chile or Peru.  Even in Buenos Aires, you’ll encounter a lot of people that don’t speak a lick of English.  Heck, the English is far better in Myanmar than it is in Argentina.
If you want to study up on some survival Spanish, here are my recommendations on words/phrases to learn:

How to make it easier if you don’t speak the language
Try to bring things up on your phone before you set out somewhere.  This way, you can point on the map where you want to go.  This is very handy with taxi drivers especially.
Get an app called “Word Lens”.  It translates signs just by pointing your smartphones’ camera at them!
Argentina can be more difficult to travel than other countries, but with these ideas in mind it can be fun
No doubt about it: Argentina can seem like a crazy place to tourists due to their unique eating and sleeping schedule.  Add in the financial side of it and the language barriers, and it can be tough!  But don’t worry, Argentina will be a great experience with a few days of practice.