Alicia and I consider ourselves “foodies”.  We’re always on the prowl for a good meal.  Lima didn’t disappoint, with a unique cuisine and dishes to try while taking in some scenic views.  Before we get to the evening and dining, here’s a few more scenes we took in while walking and biking around Lima. 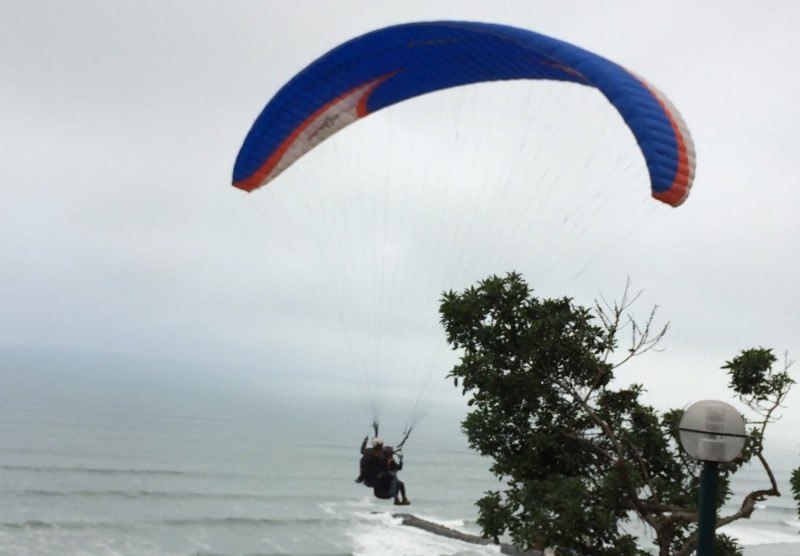 We are on a bus tour where we are on top of the open-top bus.  This paraglider is maybe 20 meters from us (when you leave the US you are required to talk only in meters.  Gotta sign a form and everything).  Yes there are two people on that paraglider.  For the low, low price for $40 USD you can risk your life!  I looked up the statistics on this and found that it’s merely 3x more dangerous than cars.  The accident rate worldwide for cars is 1.8 deaths per 10,000 while for paragliding it’s close to 7.  They take off from land very easily as they ride the air currents coming up the cliff.  Alicia said I couldn’t do it. =(
There are usually 5-10 paragliders over the Lima coast at any given time.  It rarely rains in Lima, and the wind and current is always persistent making it a great location for something like this. 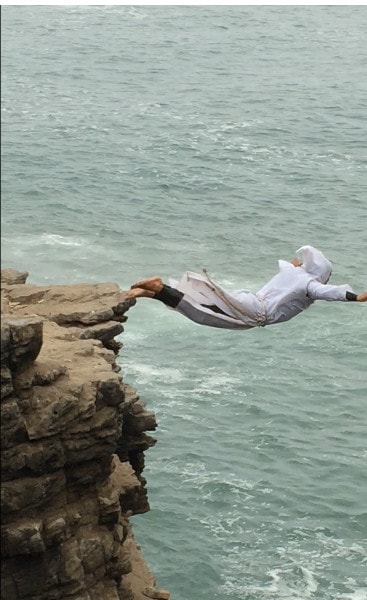 Mountain of the Monk(?) Riding out of the Barranco neighborhood, we encounter a seaside outcropping of rock with many locals congregating to watch the ocean crashing into the rocks. On top of the rocks over a ~70 foot drop into the water stands a man in white robes who dives for the crowd. There’s a story behind his jump, and per usual it’s one of forbidden love. The story goes that some time hundreds of years ago there was a servant boy in love with a noble girl. The father catches wind of this and forces the boy into the monastery at the tender age of 15. They continue their love in secret until the father decides to move the family away. The young monk, stricken with grief, flings himself from the mountaintop nearby. The diver’s monologue gives homage to the tragedy. That’s a great story and all, but then I enter and screw it all up. I missed the first jump of the “monk”, so I give him 20 soles (~$7 USD) to do it again. He’s very happy to do it again as that’s generally how much he’ll make during a full day or two of dives. Then it occurred to me that I gave a dude 7 dollars to risk his life because I can’t work my fancy first-world-overpriced iPhone. Then I felt dumb.
One of the things we learned in Lima was that prices didn’t quite conform to the quality of the food.  For the most part, the mid range and high priced restaurants severed similarly tasty food according to our palettes.  The expensive restaurants we went to were priced more for the view than the food. 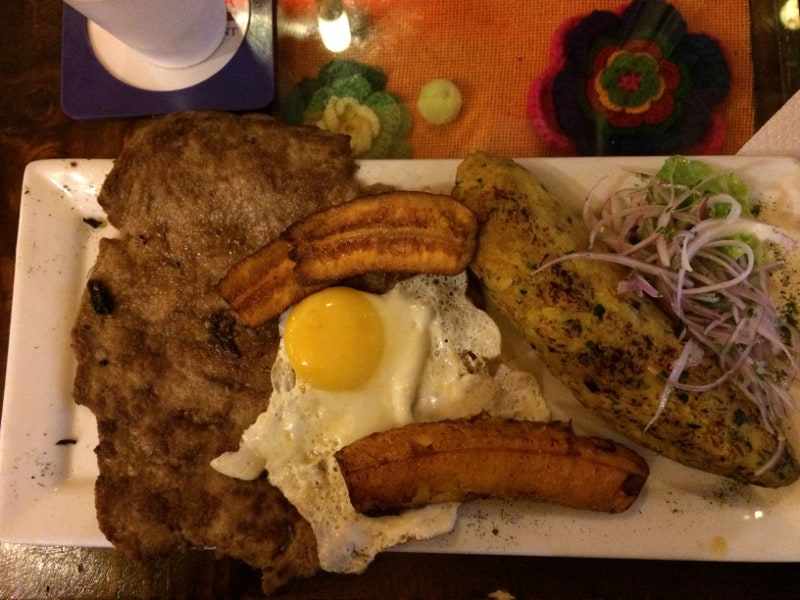 The best food we’ve had in Lima (and perhaps all of Peru) was at a little place called Mama Olla’s.   Alicia has some mystery steak that she loved, and I had thin beef done “tacu-tacu”: it comes with a fried banana, fried egg, and formed rice.  We were in Lima the night before the elections. There is a required 24 hour ban on alcohol before and after the election process, presumably because it’s a very serious matter. Our biking guide explained it best: it’s the only weekend everyone gets completely drunk, as there are discounts on liquor since they can’t sell for a few days. So all the locals have parties with cheap booze on election day while the tourists are the ones who are punished.  The system works! 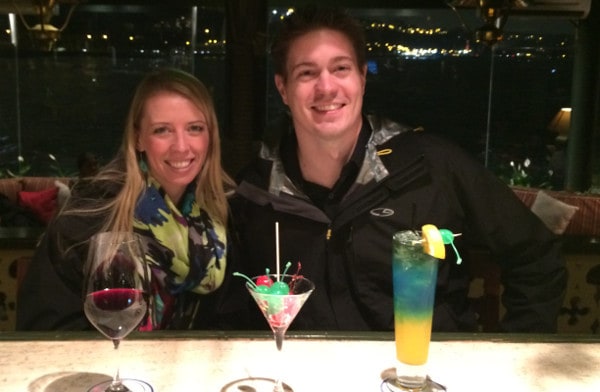 La Rosa Nautica is a cute little restaurant that sits on a pier extending from Miraflores.  It’s a very classy place that requires a reservation and has some pretty solid food.  But for a cab ride there and back along with the upcharge for having an exclusive location doesn’t make it a great value.  Going for drinks out there is a definite “must”, however. 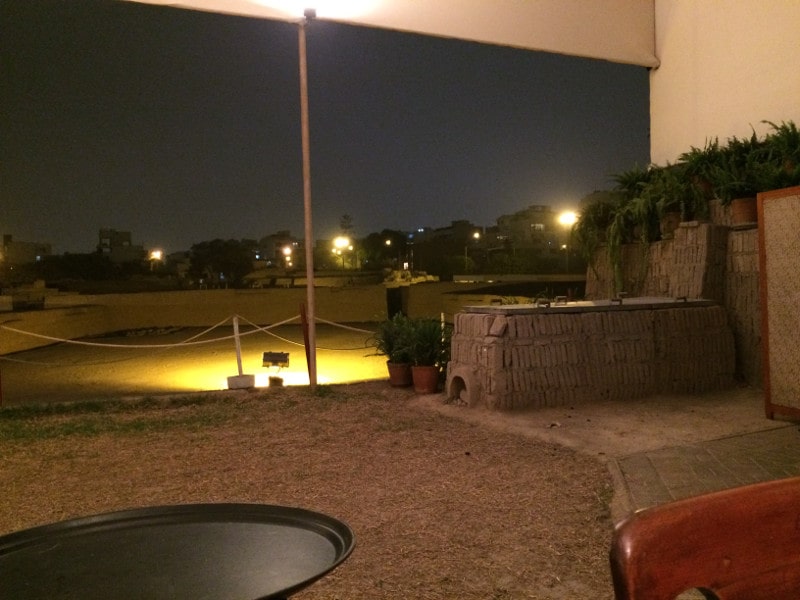 Inca meets McDonalds: Huaca Pucallana is an Inca ruin site in Lima that’s made of adobe bricks (baked straw and mud). The kicker to this ancient city is that on top of it now resides a high class restaurant. In the picture here, that is a centuries old mud oven just a few feet from the modern kitchen that serves hundred of guests each night.  Having a centuries old ruins as a backdrop to a good meal is pretty neat.  I can’t say I’ve ever done it before.