Losing weight while traveling isn’t only possible, it’s easy!  That might seem like a ridiculous statement, but there are many good reasons why an American traveling abroad will likely drop some pounds.  And you won’t even have to think about it.


More Sleep
Did you know that it’s harder to lose weight if you are sleep deprived?  Not only does the body hold onto more fat, but it increases appetite as well.  It’s the double-whammy of weight gain.
Napping to lose weight sounds too good to be true, but research is showing it to be effective (from the above article): “if you are a five-hour sleeper and start to sleep for seven hours a night, you will start dropping weight.”
Less Sugar

Food in the United States is scientifically designed to be as satisfying and addictive as possible.  Not only does food have to taste good, it has to feel good.  How do you make food feel good?  A sugar high!  And for the inevitable crash afterwards, maybe you need a pick-me-up: here’s some more sugar!  Thus as Americans we are forever on the sugar roller coaster.  Heck, even some products like chili-chicken have more sugar than ice cream.
Sugar is everywhere in US food… but not abroad.  In places like Argentina, it’s not too hard to see why everyone is pretty slender.  Their entire cuisine is grilled meats and vegetables.  For snacks, the popular dish is “picadas” (feature image above) which is a meat and cheese tray with a beer or wine.  Seriously, I think they drink the wine just to get enough calories to live.  It’s all great food, but sometimes I had to go out to get Red Bull just because my body was physically craving sugar.  Ugh.
More walking and activity than normal

We work an awful lot in the USA.  The rest of the world thinks we are crazy for doing so, and somewhat justifiably.  Working usually entails a bunch of sitting for hours on end.  It can be difficult to lose weight even with a workout program because we burn so little calories during the day.
But on vacation, we are often a lot more active than normal.  There’s walking around, taking in our surroundings, and generally a heightened energy level than what we are used to.
Sweating it out
We just got out of Cairns, Australia, and thank god we did.  I’m not good with temperatures in Celsius, but I believe the gauge read too fucking hot.  After a week of roasting away in the sun, I was in the bathroom one morning and was startled.  Hey, today I look pretty good!  Stepping on the scale confirmed that I had dropped 5 pounds.  Of course this was just water-weight and it would come back after re-hydrating properly, but in the meantime we’re in beach country and I look thinner than normal.  Win!
Slower eating

Dining in non-US countries tends to take a lot longer.  Opposed to our fast-food culture, they have what they term “slow-food” culture.  Some countries take this to an extreme.  In Argentina, it seems to me that people spend 6 hours “eating” every day.  The word is in quotes because it’s usually people sitting around the dinner table picking at food.
How does eating slower help with weight loss?  The body isn’t very good at telling when it’s full.  Simply by eating slower, you’ll take in less calories and still feel like you’ve gotten enough to eat!  Plus, eating slower gives us time to enjoy the experience more fully.
In the US, meals will often be under 45 minutes for us at a restaurant.  When we travel, it’s closer to an hour and a half.  This is not us consciously changing our habits.  It’s just the pace of other countries and it happens to be good for losing weight. 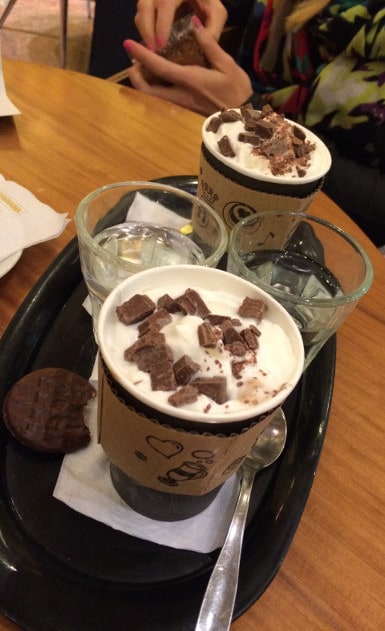 Coffee Coffee Coffee
The rest of the world really loves their coffee.  And by “coffee”, I mean “espresso”.  Because American style coffee is like water to them and they need the hard stuff.  Even the smallest vendor will have an espresso machine.  Not some silly little pot with dripping water.
Coffee can help with weight loss in several ways, namely controlling appetite, increasing metabolism, and keeping you active for longer.
My caffeinated drug of choice was Red Bull.  It can be difficult and/or expensive to find in other countries so I had to switch or lose my twitch.  Espresso has far fewer calories than the sugar loaded Red Bull does.
Less snacking
At home, we have fully stocked pantries with our favorite foods.  While traveling, there’s just not a a lot of room to keep a good supply going.  And who wants to eat in, anyway?  We want to go out!  So in general there’s very little food for us sitting around the apartment/hotel anyway.  This naturally stops mindless snacking.
Another reason for less snacking is the types of food offered in other countries tends to be less instant.  So now to have a snack, you have to go out of the building to get food which then has to be made.  I’m not saying I’ve been an angel at non-snacking.  There are certainly times where I’ve walked a mile or two just get something pre-prepared.  But at least I was up and walking for more than just the couch to the pantry.

Breakfasts in other countries suck: Semi-forced Intermittent Fasting – guide here
Seriously, breakfasts in other countries tend to be terrible.  In many countries (Spain, Argentina), breakfast appears to be cigarettes and espresso.  Spanish breakfast one morning was espresso and tomato rubbed on toast.  I don’t even…
Intermittent Fasting a type of dieting that allows you to build muscle, lose fat, and not have to eat like a prison inmate.  Basically it’s constraining all of your eating to an 8 hour period in the day.  The idea is that your body will burn fat because you haven’t eaten for 12-16 hours, build muscle because you’re fueling your body when stimulating muscle growth, and it’s easier to stick to because you don’t have to count every stupid little calorie.
I know that sounds a little too good to be true, so let’s point out the obvious secret you might have missed: you’re cutting out an entire meal and just eating lunch and dinner.  Instead of that oatmeal and juice, which can be 400+ calories, there’s nothing.  So even if you go a little overboard on dinner with that dessert, it’s mostly fine.  The problem is usually that we start eating when we wake up and continue to eat to all day.
Anyway, our breakfasts in other countries tend to be coffee and hard-boiled eggs.  We get our protein and it keeps us full until lunch time.  Plus, it’s super cheap and available everywhere.
We’ve been on our trip for 4 months at the time of this writing, and I’ve lost 15 pounds without even trying

It feels like I’ve been doing everything I can to try and gain weight, but my saggy clothes say otherwise.  We eat out at least once a day.  We order dessert all the time and get ice cream for snacks.  We drink the local wines and beers almost every day.  Our system for grading wine is “1st bottle, 2nd bottle, or 3rd bottle” because there’s always more than one bottle.
I had never intended to lose weight on the trip.  When we saw that wine in Argentina was under $3/bottle for good wines, I thought: “Yay!  Soon I’ll get new pants!”.  But the type of food and lifestyle while abroad is just naturally conducive to a lower body weight than in the United States.  So instead of going to the gym, hop on a plane and watch the pounds melt away.