We went on a “day in the life tour” of a native Peruvian.  There were some downsides to the tour which I already detailed, so we’ll concentrate on the good parts. The theme of their lives seems to be that they acknowledged the outside world had moved on, and that was OK with them.  I asked our guide if there was any “keeping up with the Joneses'”, and she assured us there was not (more on this in a second).  She went on to describe it as difficult to keep native Peruvians employed, because there were very few worldly possessions they wanted.  If they wanted to make money to afford a radio, they’d work for a month and then stop showing up.  Since many of them had a plot of land on the family farm, what need was there to earn more money?  They already had shelter, food, and community.  Truthfully, it’s very authentic living.


Back to the part where our guide said competition with your neighbor wasn’t a big thing here… Our guide later contradicted herself.  While she was driving in Cusco, she mentioned that even being able to drive a car was a status symbol among the people.  Having a car was seen as affluent.  Since we’re on the topic of driving, riding as a passenger in other countries is terrifying.  In Jamaica, our cabbie was tail-gaiting a cop car (literally a few feet from his bumper) and honking the horn until the cop pulled over so we could pass.  I’m sitting there thinking to myself, We totally have weed in this car because the driver just offered it to us minutes ago, and the cop is going to be super pissed and pull us over and find it and hold us hostage…  Only that didn’t happen, because there are weird traffic customs in other countries.  In Jamaica, you can tail-gate cops.  Good to know?  Anyway, in Peru they honk their horns as a signal that they are going to pass/merge, and God help the person who gets in their way.  Seriously, once that horn sounds, all bets are off: the aggressor is assuming that the car in front of him heard his horn from 100m away and will do everything in their power to get out of the way.  Alicia didn’t think anything of the driving as she usually got stuck where she couldn’t see anything.  I soon made it a point to sit as far back as possible.

Overall, native Peruvian lives are astonishingly old fashioned.  Clay shingles are still in use all around the country and made exactly the same way they were made hundreds of years ago.  There’s a mud brick oven that burns bamboo to bake the clay shingles.  The mud for the shingles is cut out of the hill where they operate, stomped and broken up by hand and foot, and then water is added to make the clay.  The shingles are made in a mold and laid out to dry.  It’s hot labor and for every 5,000 shingles bought they receive roughly $140 USD.  It takes about two weeks to make the shingles, and they still have to pay for the delivered bamboo that fires the oven.  They make around 40-50,000 shingles per year.

And it’s time to rant.
I appreciate keeping heritage and culture preserved, but there has to be a better way to do it.  Generations grinding away in back-breaking labor just seems like a waste.  Peruvians are still doing things the same way the Inca did hundreds of years ago!  They are still using Ox and wooden yokes to plow their fields, ancient Inca aqueducts for irrigation, shucking corn by hand, and making their homes from mud and straw.  Now, I don’t expect them to hop on Amazon and purchase the tools that could drastically speed up the process and make their lives easier.  Aside: I did hop on Amazon and find simple and cheap tools they could afford that would greatly reduce their workload.  However, I do expect that somewhere between Incan civilization and Amazon Prime that there would have been ONE improvement along the way.  One!  These people are the extreme version of “if it ain’t broke, don’t fix it”.

We head up into the hills to meet a local Peruvian family that has their own farm.  Again, they are in the hills because the Inca’s were pretty good at primitive irrigation.  The water that comes off of the mountains is channeled through rock gutters.  This water flows through houses like ancient plumbing and can be steered through fields with little concrete gates.  Sometimes the channels get a face lift through concrete, other times they look as old as they are.  It’s shocking how many of them are still working with ancient stone.  Because I’m a moron, I actually drink from one of the springs that feeds these aqueducts.  Thankfully, I didn’t get sick even though I drank 2 liters of it. 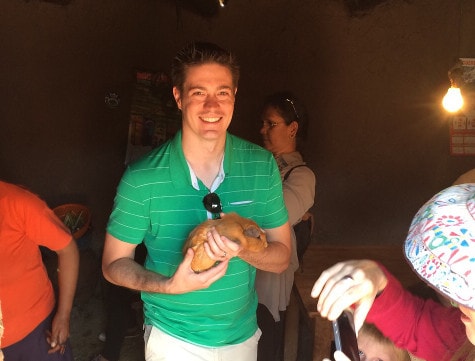 There are a few things wrong with the above picture.  First, that’s a guinea pig that is desperately trying to escape.  One problem is that they don’t really go anywhere: they are so domesticated as animals that they just cower in the corner of the dirt floor kitchen squealing even though the door is wide open to run away.  The second thing is that we are about to eat food from a mud oven, yes the oven is literally made of hardened dirt, and the kitchen is dirt-floor to go with the mud walls.  (Counterpoint: Alicia can testify that while it’s entirely dirt and mud, it’s still cleaner than any kitchen after I’ve cleaned it.  It’s a good point.)  The final problem is that I’m allergic to nothing more on the planet than guinea pigs, and start sneezing my head off after this.  The last time I’ve actually encountered one was a decade ago, and I had completely forgotten!  Where did I run into one?  My sisters had one, called “Snowflake”.  They were quite appalled at what was to come next. 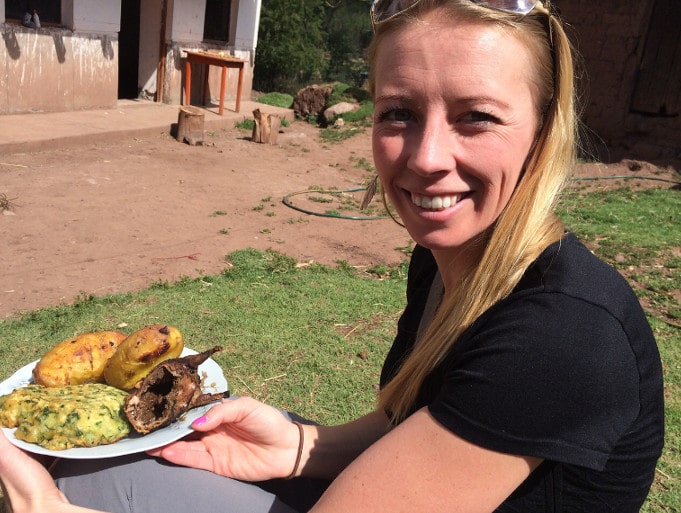 Yep, that’s “cuy” on the right (at least his lower half).  It’s considered to be a delicacy.  The green-speckled thing is fried egg and spinach(?), and the other two are some huge potatoes.  Guinea pig tastes kind of like dark meat chicken.  That is, when you can actually get to the meat of it.  It’s pretty hard to eat because the little buggers don’t have a ton of meat on them to begin with, and you’re cleaning it as you eat it.

And here’s where I feel like a stupid tourist that is insensitive of other cultures.  We can’t eat this.  Sure, we try to get through the cuy, but it’s not going to happen.  It’s just too far out there for us, so we have to give it away to the other guests.  Second, there’s no way Alicia or I can go through 2 whole potatoes and that huge omelette-like thing.  So we have to pitch a fair amount of it, which feels especially bad considering our tiny hosts (4’10”) plow through even more than is given to us.
We leave with a wide-eyed impression of what they go through.  I’m not sure we fully understand their lifestyle, but they seem very content with it.  It reminds me of the story of the American businessman who vacations in Mexico.  The businessman happens upon a Mexican fisherman and asks the man his story.  “Senor, I fish a little each day, take a siesta with my wife, and spend my evenings playing guitar and playing with my children.”  The businessman claims that the Mexican can greatly improve his fishing business by putting in 10 years of hard work, and then retire wealthy.  “But what next, Senor?” asks the Mexican.  “Well then”, said the businessman, “you could take siestas with your wife, and spend the evenings playing guitar and playing with your children…”