Once upon a time, Cusco used to be the capital of the Incan civilization.  Now it’s primarily a rest stop on the way to Macchu Pichu.  But with that much history behind it, there’s certainly some fun things to see and do here.  When we travel, we like to experience the local culture.  Something different from the typical tourist experience and not just attractions.  There are many ways to do this, but we have some favorites. 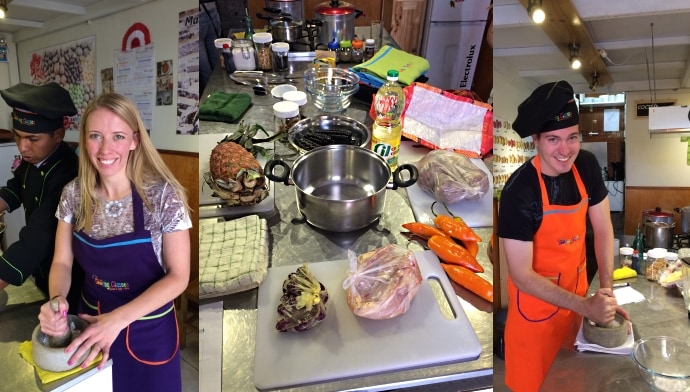 First, cooking classes give some insight in how the culture has used what was available to them.  For example, in Peru there is a dish that is popular called “ceviche”.  This is fish that is left sitting in citrus, which “cooks” it without the necessity to heat it.  Both fish and limes are prevalent in the country and it’s an interesting dish that is best tried in Lima or another coastal city.  Another case is the local liquor: Pisco.  Pisco is a hard liquor made from grapes, which also grow in country, which is roughly a brandy.  It originated when the early European immigrants wanted to send wine back to Europe.  To make sure the wine didn’t spoil en route, they added alcohol and sugar to it for the voyage.  At some point they preferred the liquor that way and have been making it ever since.  It’s neat stories like these add flavor, history, and background to the country.  All while eating great food!


The cooking class in Cusco was run at a little place off of the plaza.  We opted for one that was run by locals rather than a full featured production in a manufactured kitchen straight out of Pottery Barn.  Our class was lead by Freddy, a former English/French teacher turned chef.  He got out of teaching and into cooking just because he loves it.  And he has to love it, because he works from 8 AM to 10 PM 6 days a week.  He makes me feel bad about myself with how hard he works and I’m typing this at 10 AM barely ready to face the day.
Another thing we love about cooking classes is trips to the market.  When we went to Thailand and took a cooking class, we were absolutely amazed.  There were things that we didn’t even know existed!  The markets in Peru were no different.  We actually went to two different ones, a market in Cusco and one that is real local outside of town. 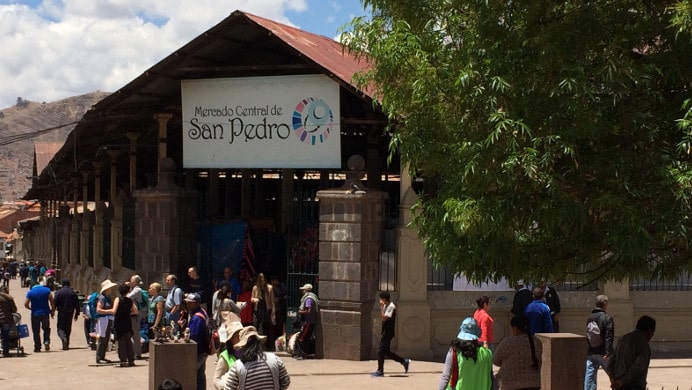 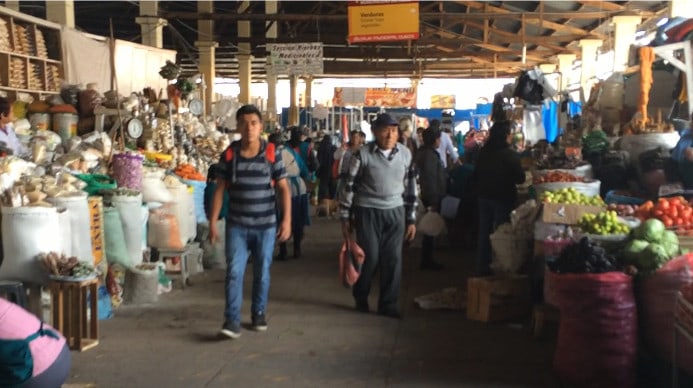 Now, there’s some things you should know about these markets.  First, the levels of sanitation and refrigeration aren’t exactly top notch.  All manners of raw meat sits out in the open air on the dirty tables allllll day. 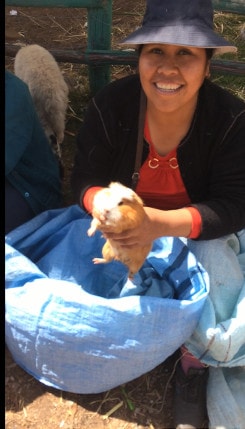 Don’t quite like the conditions?  No problem, Peru offers something I hadn’t seen yet: live animals you can buy and take home with you.  Can’t get any fresher than that.  Oh right, that’s a guinea pig.  Remember when I said cultures use what they have?  Well, the guinea pig is a local delicacy.  They call them “cuy” (pronounced “qwEE”) for the sound they make.  Typically the cuy just run around the kitchen until they are cooked: the little guys don’t run away.

Interesting sight: this chicken was cut open and inside was un-laid eggs.  I’m not sure why they kept it around.  They probably thought it was interesting too.  I asked our guide if there was any special dish that was made with this, and she said No.  It was just something unusual they couldn’t sell.
Back to the cooking class. The menu for the cooking class included an entree/starter, a main dish, dessert and a traditional Peruvian cocktail.
We made Aji de Gallina with rice for the main dish. It is kind of like a Peruvian hotdish but with more flavor.  There’s potatoes on the bottom with yellow chili pepper sauce and Andean cheese over pulled chicken.  It’s a nice bit of comfort food that I didn’t expect.  While we went to Peru initially for Macchu Pichu, we were surprised that the cuisine is excellent across the country.  Bonus! 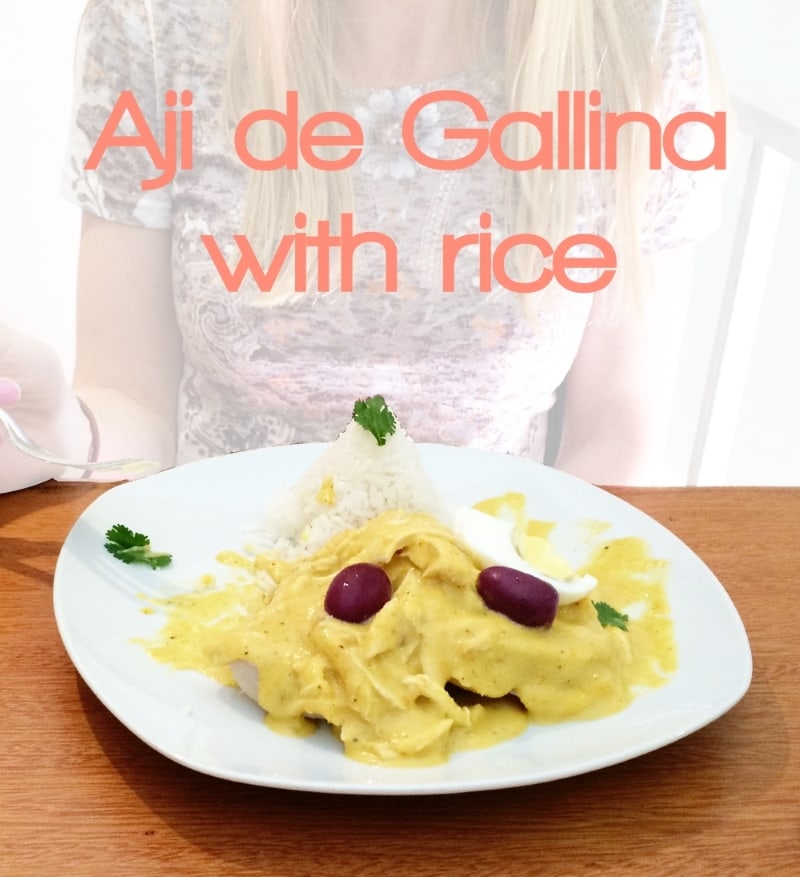 For dessert we made purple corn pudding.  There are multiple types of corn here, and most of them seem very unlike the type of corn back in the ‘States.  One type of corn is “choclo”, which is white corn with kernels as wide as your thumb.  The type of corn we are using for the pudding is “morada”.  It’s purple and somewhat sweet.  This type of corn makes “chica”, which can be a type of soft drink or wine depending on what region you’re in.  I can’t tell if they like chica or not.  “Chica” is also a synonym for “cheap”, local variations are everywhere, but I never actually see people drinking it.  Anyway, back to the pudding.  This purple goo tastes exactly like the insides of a Hostess fruit pie.  Exactly.
The entree we made was a soup called Crema de Moraya. Moraya are freeze dried potatoes that are easily found in any Cusco market. Similar to corn, there are endless types of potatoes found in the markets here. We used a mortar and pestle to prepare the moraya for use in the soup. The soup also contained diced beef, egg, onion, garlic, cumin, and cilantro. Alicia enjoyed the soup but it was not my favorite dish.
And what Peruvian meal would be complete without Pisco Sours?  Pisco is a type of brandy that originated in Peru (or Chile, depending on if you’re talking to a Peruvian or Chilean), and a Pisco Sour is a sweet and frothy drink that is served all throughout South America.  It’s a solid end to a great class.