While in Lima, we stayed in the Miraflores district.  It’s a listed as a touristy place to stay that is well maintained with lots of security guards and police around.  This part of town is also one of the cleaner areas.  The interesting part is that I felt this city was more authentic than other places in Peru that we’ve traveled.  We were often the only tourists around [that we saw], but the signs and menus in English suggested otherwise.  In other areas of Peru there are busloads of tourists swarming a tiny area, but not here.  In Lima it was great to see the local population as they enjoyed the parks, surfing, and general living.
Tourists are often advised to skip Lima on their way to Cusco and Machu Picchu, but I wish we would have stayed more than a week in Lima.  Heck, even the taxi driver taking us to our hotel in Lima told us in his limited English that 6 days was too long.
We did manage to do some fun things and not work all the time:

Kennedy Park is a cute little park by our hotel in Miraflores where a lot of locals come to hang out.  It’s kind of a central entry point into the trendy district where someone can sit down and relax.  The weird part about the park: cats.  Cats everywhere.  They are wild cats and live in the park.  People pet them and hold them.  They seem to be in OK shape for wild cats, which isn’t always the case.  There are a lot of stray animals in Peru, and some of them look pretty beaten up.  These cats look they are doing just fine.
The other weird thing is the cat shrine: there’s a church near Kennedy park that has a small shrine to the Virgin Mary that is fence-enclosed.  When the cats have had enough human interaction, they escape into this tiny kitten zoo.  At any time, there are 10+ cats hanging out with Mary.  Bike/Running tours are great things to do on vacation as they take you around the city where you get to learn a lot of the history.  They trump a bus tour because you get personal time with a local, and it’s here where you learn the best stuff.  For example…  These iron blue poles are everywhere in Chorillos, another district of Lima.  Our guide tells us that they were placed there by a previous mayor of Barrano in an effort to brighten up the city.  He also tells us there’s more iron in these poles than in the Eiffel Tower, and it’s not hard to believe that if you see how many of these darn things there are in the neighborhood.  There’s one problem: the mayor who had these put in also owned the company which sold the materials.  It’s disappointing to hear about that kind of corruption, because Chorillos is a mostly cute neighborhood which could have used actual help instead of this visual white noise.  Here’s why I say it’s a “mostly” cute neighborhood: this is our guide for the bike tour, and he’s holding a can of mace.  Finger on the trigger and everything.  Later when I ask him about it, he remarks that it’s mostly for dogs and that he’s never had to use it on people.  But that the area has a lot of poverty and crime recently as the mayor, currently on his 5th term, caters to impoverished people to stay in office.  As our guide put it: it’s easier to please someone who has almost nothing, rather than try to compete with Miraflores, but now you have a lot of people in one area who are all fighting just to survive. 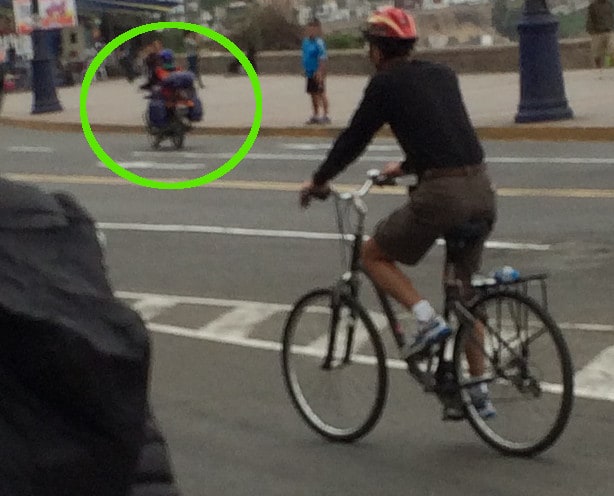 What’s more dangerous than a motorcycle?  A motorcycle with three propane tanks strapped onto it.  Gas doesn’t flow to each persons’ home via underground pipe: instead they buy a standard tank and hook it up to their home.  Run out?  Guys like these deliver them right to your front door.
Inca Cola is a popular soft drink in Peru that I see absolutely no one drinking, ever.  Fun fact that you probably already know: it wasn’t the official drink of the Inca.  That went to chicha, a semi-sweet drink made from purple corn (morada) that could be alcoholic or not.  Anyway, I had to get one just to try it.  Inca Cola tastes like strong cream soda.  I couldn’t finish it.


I typically say “Hello” to Peruvians when I first interact with them.  I’m not trying to be a douche that’s too good for their language, but my Spanish is beyond awful despite 5 years of study.  Even though I wanted to learn another language, my classmates in high school and college were terrible.  Every class I took we basically started from scratch even though it was “Spanish 4”.  No teacher wants to fail the entire class, so they re-taught Spanish 1 every single year.  Anyway, it turns out that the quickest way to tell a Spanish speaker that I don’t know the language is to actually try and speak Spanish.  It’s quite a blow to the old ego.  As noted before, Lima earns the nickname “the grey” by having constant cloud cover.  Being from Minnesota and a nerd to boot, I showed them just how fragile I am: I got sunburned through the clouds.