We finally arrived at our first destination: Lima, Peru!  This city has the nickname “la gris”, or “the grey” because of the constant fog conditions over the city.  It never really rains here, despite being overcast.  While the skyline can look pretty sad and depressing since it’s like this all the time, the cityscape is much more vibrant.
It gets prettier, I promise!  Upon arrival, we saw paragliders in the distance.  Paragliders are like hang gliders, except with a little seat that sits underneath the parachute.  There are no motors pushing it, they rely on the wind and warm air currents coming up off of the cliff. 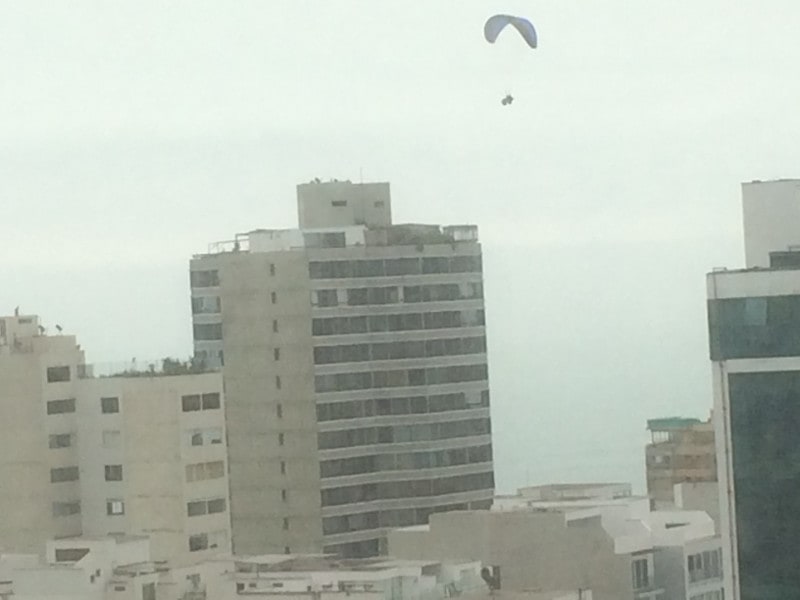 This is mildly upsetting to me to see these basically flying over the city buildings, and here’s why: Below is a DJI Phantom 2.  It’s a “quadcopter” equipped with a GoPro.  Basically it’s a remote-controlled toy.  This device can fly a mile in any direction and take great aerial shots.  It can travel 50 mph and is completely amazing.  What I’m trying to say is that I would have literally murdered someone for this thing as a child. 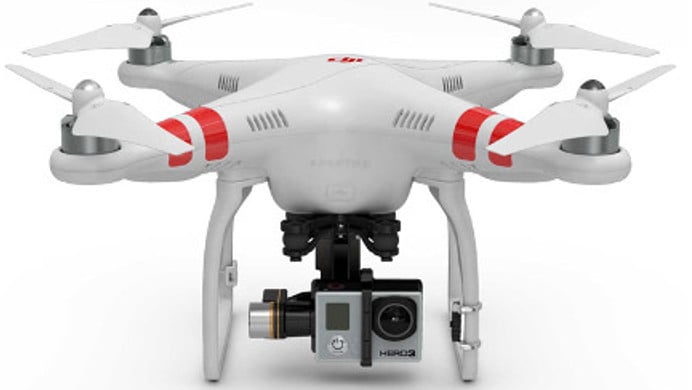 Here is my specially purchased bag for carrying my Phantom 2:


Yep, my copter got confiscated by Peru customs.  I researched beforehand on countries that would allow them, and Peru was promised to be one of the most progressive countries in this regard.  There are videos of copters flying over Macchu Picchu and everything, so I was sure I was safe. Going through customs there were three guys barely paying attention to the X-ray screen for luggage.  They were mostly joking around in Spanish when I heard a word I know and hate: “DRONE!”.  Turns out that there was a law passed banning “drones” (I hate this term as people associate this RC toy with a military device that fires missiles) back in August.  Obviously the government’s website wasn’t updated and so I walked right into this.  They say that I’ll get it back when I leave the country, but I’m thinking of just sending it home if and when I do get it back.  If the so-called “drone friendly” country confiscates it immediately, where else could I even take it?  To add insult to injury, there was even an article on the plane ride into Lima on “dronies” becoming common – selfies taken with drones.


We stayed in Miraflores.  This is the tourist district of Lima, and it’s very noticeably so.  There are cops literally on every street corner to encourage safety, and it’s not surprising that this is where most tourists choose to stay.  It’s an upscale district with a lot of trendy shops and food options.  And trendy pricing to go along with it.  But as we discovered, walking a few blocks outside of the trendy spots we were able to encounter more local flair.  And no English, which seems to be a recurring theme outside of the United States.  So we rely on the universal language of pointing at stuff we want, like any toddler.  It’s easy to see how the locals might think all tourists are dumb.
Everything is just harder when you’re on the road.  We have to wander around for nearly everything.  Lunch has gone from a 15 minute break to a several hour ordeal where we stumble around and try to find somewhere that sells simple sandwiches.  Sure we could visit the Subway or McDonalds that we saw, but where’s the fun in that?  Instead we at least visited the “Bembos”, which is a fast food chain local to Peru.  Though when I ate McDonald’s in Tahiti, it was completely different: deli style cold sandwiches and no french fries anywhere. 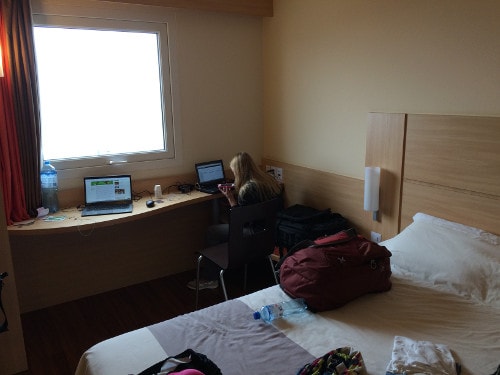 Here is Alicia holding a conference call from our hotel room slash new office.  Working on the road is now a big part of our life, typically taking up all Sunday through Tuesday – 14+ hours working those days.  Right now I’m typing this from the best American WiFi export product that sometimes sells coffee, Starbucks.